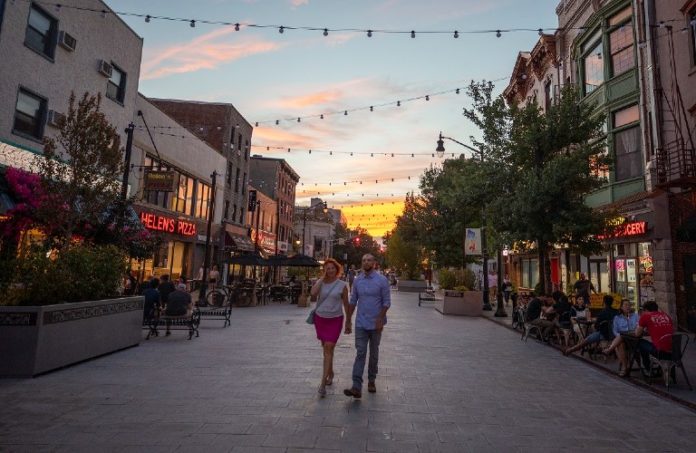 It’s official. The Newark Avenue Pedestrian Plaza in Jersey City has had $7 million of improvements completed. On Monday, Mayor Steven Fulop joined the city council and community members to celebrate the project’s completion with a ribbon-cutting ceremony to give “restaurant row” the permanency it deserves and creating one of New Jersey’s premier destinations for shopping, dining, and community events.

Upgrades include an outdoor concert stage for community events, bike racks, benches, planters with built-in seating, tree plantings and leveling of the street to remove curb drop-off for safer stroller and wheelchair accessibility.

“In 2015, we had the vision to maximize this space by creating a pedestrian-friendly plaza and establishing a sought-after shopping and dining destination and overall economic driver that has since exceeded our expectations,” Fulop said. “Today’s ribbon-cutting is the final piece to accomplishing a permanent, community-driven pedestrian mall that boosts local business, attracts investment and, most importantly, establishes a premier location to foster community with various free public events throughout the year, weekly entertainment on the new concert stage and daily foot traffic where residents and visitors can enjoy all the plaza has to offer.”

The Pedestrian Mall was first closed to vehicles in 2015 as a pilot program to limit traffic and create a pedestrian destination. The plaza was expanded to a second block in 2018. During the COVID-19 pandemic, the plaza was lengthened to Grove Street between Montgomery Street and Christopher Columbus Drive, as well as 1st Street and Newark Avenue. The expanded outdoor capacity helped restaurants and small businesses stay afloat and safely reopen sooner.

The city hosted multiple community meetings to garner public input and incorporate feedback throughout the design.

A stage area has been constructed for regular live music and performances that will be free and open to everyone. Granite pavers have replaced the original painted green asphalt and elevated the street level to match the sidewalk for a more cohesive structure with better stroller and wheelchair accessibility.

Decorative trench drains now line both sides of the plaza alongside rain garden tree planters and café lighting for improved visibility. Dozens of tree plantings, underground utility work, drainage elements and other green infrastructure elements will also help with stormwater absorption and beautification throughout the area.

To create a more aesthetically pleasing environment throughout the plaza, additional permanent structures installed include:

“Today marks the culmination of many years of hard work. The pedestrian mall has become a vital point in the area, and I couldn’t be happier,” added Rachel Sieg, executive director of the Historic Downtown Special Improvement District. “From holding meetings with business owners to fielding calls from property owners and city officials, this process was not easy, but so worth it. I feel an immense sense of pride and accomplishment with the conclusion of this project, and I hope that visitors and residents of Jersey City will enjoy the mall for many years to come.”

The Newark Avenue Pedestrian Plaza upgrade comes after two other major investments in main streets throughout Jersey City on Central Avenue and West Side Avenue. Each project incorporated community input to focus not only on beautification and functionality, but also on the unseen aspects such as stormwater absorption to mitigate flooding and other environmental enhancements.

“Now that the finishing pieces are in place, the excitement about the plaza improvements can really be felt. People are using the space as it was designed to be enjoyed, and these welcomed upgrades are being completed just in time for Jersey City Restaurant Week starting next week, July 17-31,” Carmen Mendiola, president of the Jersey City Restaurant Association, stated.