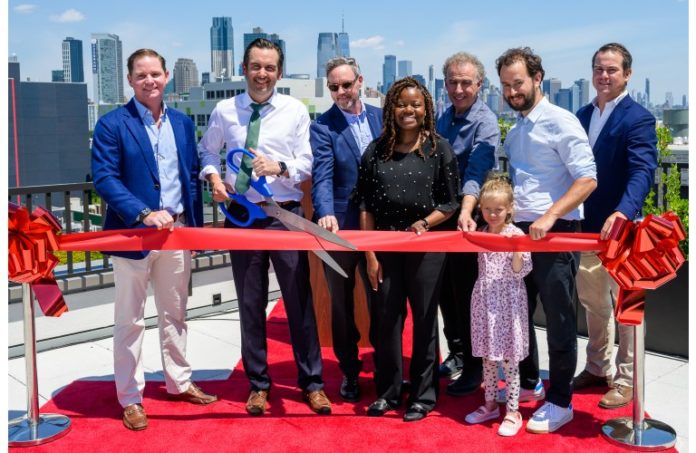 With the cut of a ceremonial ribbon, Jersey City officials, business leaders and other dignitaries last week marked the completion of the Hazel, a new luxury rental building that has delivered a high-end residential lifestyle to the city’s trendy Bergen-Lafayette neighborhood.

Jersey City Mayor Steven Fulop joined development principals from Alpine Residential and Fields Grade for the ceremony, which took place in the building’s Sky Lounge and outdoor, landscaped roof deck with the Manhattan skyline in the backdrop.

The event was held four months after the Hazel launched leasing for its 114 stylish residences and immediately found a welcoming public, with tremendous rental velocity recorded since early February. The Marketing Directors is the building’s exclusive leasing agent.

“Thank you first to Alpine. They’ve done several projects in this neighborhood and are also slated to do SciTech Scity, which is around the corner from the Hazel and one of the most significant projects that is happening in Jersey City and will be transformational for the entire region,” Fulop said. “I’ve also had the privilege of working with and calling Rob and Jim Caulfield friends for close to 17 years. I appreciate the fact that they follow through and build what they say they’re going to build. More than that, they are willing to invest in areas that aren’t necessarily on the radar yet, whether that’s on Jersey City’s West Side or right here in Bergen-Lafayette.”

Located at 89 Monitor St., the Hazel is located in the heart of the close-knit neighborhood that is conveniently connected to the city’s lively downtown district. Six affordable residences are also included in the building, part of 30 total affordable homes the development team plans to deliver throughout its Bergen-Lafayette portfolio.

“The Hazel and its leasing success are further proof of the appeal of Bergen-Lafayette, which offers the best of both worlds for today’s renter,” Bill Rosato, managing partner of Alpine Residential, stated. “The community is close to all that makes Jersey City so great, including its vibrant dining, cultural and entertainment scene, and the renowned Liberty State Park. It also provides a great alternative to the hectic pace of downtown neighborhoods with a more tranquil, small-town environment. We’re excited to be a part of the growth of Bergen-Lafayette and look forward to continued investment in the community.”

Spurring the popularity of the Hazel is its mix of well-appointed studio, one- and two-bedroom apartments complemented by a suite of forward-thinking, resort-inspired amenities.

The Hazel is managed by the developer’s affiliated management company, South Oxford Management.