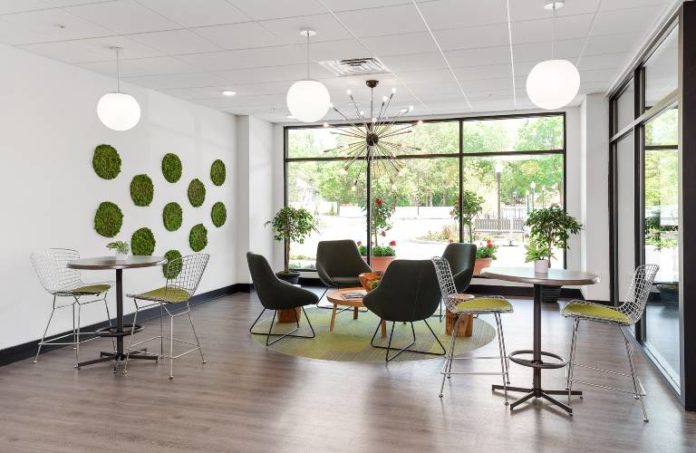 For her and other building designers, nothing budgetary so far distracts them from their usual philosophy.

“The more beautiful, the better,” she said. Add to that a lot more emphasis on “connecting buildings to the community and their history.”

And she’s thankful that’s still allowed to be the topmost priority. Because the associate vice president of design and development at CHA Partners said that, on a project, such as her firm’s recent reworking of a storied hospital into an apartment complex, that’s what the community expects.

Donnelly said Plainfield residents were at one point struggling to embrace the idea of redeveloping the former Muhlenberg Regional Medical Center. The community had a strong bond to it — understandably, Donnelly added, as it was where residents’ children were born.

“We really wanted to rescue a hospital that had fallen into disrepair,” he said. “That way, it was a viable building that didn’t have to be demolished. Because it was in serious jeopardy of being torn down.”

CHA Partners’ master-planned redevelopment of the 14-acre medical center, which had shuttered in 2008, included a new health care facility as well as a 120-unit luxury rental complex called the Randolph, which opened about a year ago.

From a design perspective, Donnelly said the development has all the amenity-rich hallmarks that have come to be expected of multistory apartment buildings in the region. In the Randolph, that includes a coworking space, a gym, a pet spa, an Amazon Hub and other features.

But what stands out for Donnelly about the modern residential complex — and where it’s an example of architecture firm’s commitments today — is in its incorporation of the former building’s 100-year history.

Donnelly had pulled a lot of that history out of conversations with the Plainfield museum’s director. She noted a lot of the ornate details of the original hospital’s architecture, such as its brick facade and the Corinthian columns that stood outside the building.

Even with how expensive rehabbing a building can be — plus all those other financial- and industry-related headwinds developers have contended with since the start of the pandemic — the idea was to salvage those architectural elements at any cost.

“These elements from the building that were torn down, and weigh a ton each, we decided to take them and place them horizontally, aligning the promenade path that leads outside,” she said. “The developer wasn’t saying, ‘No, we’re not paying all this money to get a special forklift to lift a 5,000-pound column and move it.’ They liked the idea. They wanted to keep the history.”

Donnelly is proud of the end result: Architecture and design in a building that tells a story of the building’s past, while still having a modernized feel.

On a recent trip to the residential complex, Donnelly, while idly straightening plant pots and sweeping fallen leaves off of the floor near the entrance, had a community group tell her that they were pleased with the end result, too.

“The community loves it, I do as an architect and (the developers) do,” she said. “If you have a beautiful place to live that’s safe and comfortable, it brings about everything that’s important to human life, experience and who we are.

“And, anyways, why shouldn’t we be surrounded by beauty?”

How do you reopen business safely in N.J.? Amazon exec details...