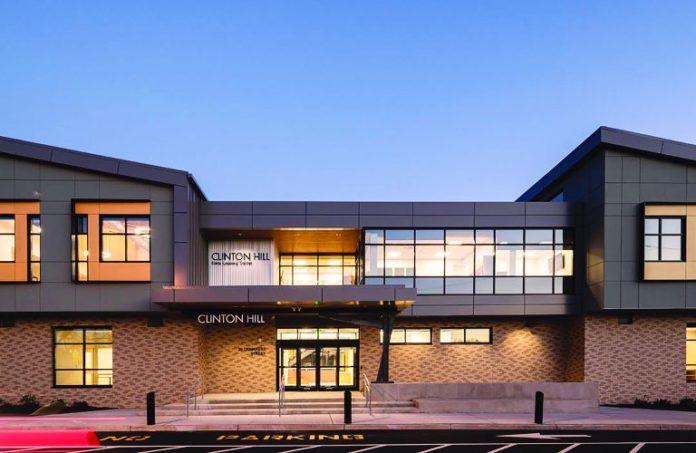 There’s a long hallway, as architect Richard Alderiso described it, with solid walls and doors flanking the empty middle in perfectly symmetric order. There’s a decaying, dead-end wall down the dark hallway, with no windows along the way to let in daylight.

And you’re probably late for class.

It wasn’t Alderiso’s nightmare. It was him describing the haunting architecture of the schools of his youth.

And it’s the sort of architecture that firms such as his have worked to pave over.

DIGroup Architecture, where the certified architect serves as principal, is one of the firms that has taken on the task of designing a modern New Jersey school. The New Brunswick firm is particularly focused on schools in the state’s urban settings, where architecture and design was once an afterthought.

The firm has been involved in more than $1 billion of construction and reconstruction of educational projects in urban centers over the past decade. Many of them were spurred on by funds made available by the New Jersey Schools Development Authority.

It has had a hand in some of the state’s biggest recent school designs, such as the $133 million Camden High School, unveiled last year. And, two years before, the $155 million Trenton Central High School. The firm often redesigns older buildings for current-day educational purposes, or rehabs buildings such as the Memorial Elementary School in East Brunswick, which had been severely damaged by a fire.

Less encumbered by existing conditions, the firm recently designed an early learning center in Newark that had been awaited after the razing of lots in the city’s South Ward two decades prior — paving the way for a school that never came.

The Clinton Hill Early Learning Center was finally opened this year as a free center of pre-K learning for qualifying local families. Revitalization group La Casa de Don Pedro and Clinton Hill Community & Early Childhood Center paired up to bring the learning center to life, with DIGroup pitching in on the design side.

“The project really provided a lot of needed space for those two entities,” he said. “It was a fun project with a great team of people. And they’re always really satisfying, those projects. You can see the effect of the work immediately.”

Alderiso said that was already on display during the learning center’s ribbon-cutting ceremony with Newark Mayor Ras Baraka and other local leaders at the start of June.

“Kids had already started in school, so, we were seeing the building in use, the smiling faces,” he said. “It’s just a great experience. And the people who run those schools really do the best they can with whatever they have. So, we really wanted their vision to shine in that setting.”

For the center’s 40,000 square feet of learning space, Alderiso said the design was left very open and intentionally flexible for those running the school. A space could be a classroom one day; another day, it could be adapted as an indoor gathering space for activities or a conference room.

The center’s design team also wanted the learning spaces, as well as the connecting corridors, to have natural light pouring in from large windows.

In other words, nothing like the dimly lit school hallways of the past.

“For me, anyways, when I think about the schools I went to — they were almost like office spaces,” Alderiso said. “The old style of building out those schools was to make them into a very structured setting, with desks lined up in front of a teacher in a very basic room.”

The classrooms of today flow more easily out into corridors, he added. It’s part of the way learning spaces are being dreamed up today.

“Settings are far more communal,” Alderiso said. “That’s the driving force behind a lot of what we’re doing now. They’re group learning spaces that lend themselves to full participation by anyone. The architecture and design of these spaces has really changed so much. And for the better.”