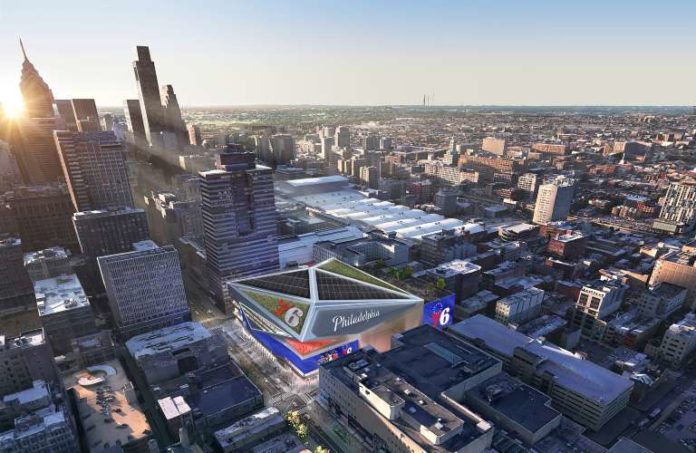 The Philadelphia 76ers announced Thursday plans to build a $1.3 billion arena in Fashion District Philadelphia and serve as an anchor to Center City.

The plans, however, only include an arena. The team said it is fully committed to the practice facility and offices it opened in Camden in 2016.

“We remain committed to Camden and have no plans to leave,” Director of Basketball Operations Rob King told ROI-NJ. “We look forward to continuing to have a positive impact on this city for many years to come.”

The team has a long-term commitment to Philadelphia, too.

Josh Harris and David Blitzer, managing partners of the 76ers, said the proposed privately funded, purposely built sports and entertainment arena still is a decade away. In fact, a groundbreaking is not expected for several years and that the hope is that the arena will be ready for the 2031-2032 NBA season (or the season after their current lease at the Wells Fargo Center ends).

As of today, the arena project is called 76 Place.

Harris explained the mission and the vision of the project.

“The Philadelphia 76ers are a storied Philadelphia institution with a proven track record of investing in their community,” he said. “That’s why we’re committed to building a world-class home in the heart of the city and creating a privately-funded arena that strengthens ties within the local community through investments that prioritize equity, inclusivity and accessibility.

“David Adelman shares our vision for ensuring that the new arena is an anchoring force in the local community, creating well-paying jobs and economic opportunities for those who need them most.”

Adelman, the CEO of Campus Apartments, co-founder of FS Investments and founder of Darco Capital, was appointed chairman of the new development company with a mandate to locate, design and develop a destination that serves as a world-class arena facility, but also a lever for the city of Philadelphia’s economic growth by promoting transformative community development, local job creation and equitable wealth-building opportunities. He was selected to lead the development project for his globally acclaimed accomplishments in real estate development in Philadelphia and nationwide, as well as his dedication to local philanthropy and investments in Philadelphia startups.

“The Philadelphia 76ers’ extensive evaluation of potential sites for an arena over the past two years culminates today with plans to pursue the Fashion District Philadelphia site as the proposed new home of the team,” Adelman said.

“The chosen location is a key step in the process of developing a destination that provides Center City and surrounding communities with an economic engine generating activity through 76ers and youth games, concerts, events and more.”

76 Devcorp carefully evaluated numerous potential sites before determining Fashion District Philadelphia as its preferred location. The site was selected primarily due to it being the most transit-rich location in all of Philadelphia, the ability to redevelop an existing commercial space, and the opportunity to play a role in the continued revitalization of Center City.

The development corporation will partner closely with Macerich, the managing partner of the owning entities and operator of Fashion District Philadelphia, to realize the full potential of the site.

Adelman said he is eager to get going.

“Quite simply put, there is no better place to build an arena in Philadelphia than in Center City, with its robust public transit infrastructure and existing dynamic businesses eager to serve fans and visitors alike,” he said. “76 Devcorp is inspired by many successful sports and entertainment arenas built in dense urban centers that promote integration with the surrounding communities.

“We’re dedicated to making sure this development is a win for our fans and Philadelphia at large.”