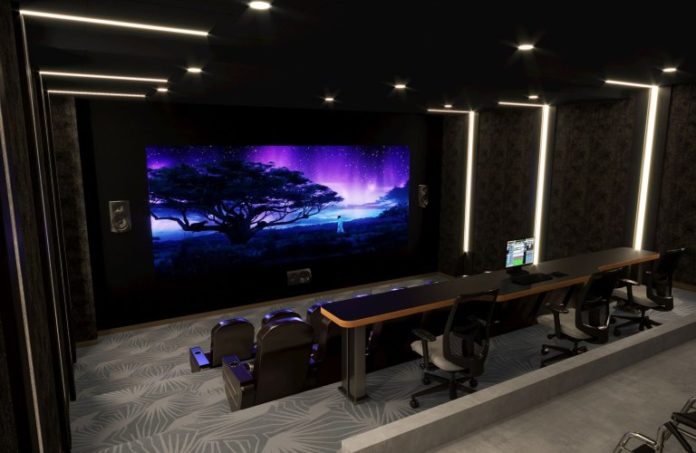 As he approached a building in a rustic French village, Steven Gorelick described it as amazing. …

Amazing, that is, where a Hoboken warehouse can take you.

Gorelick, executive director for the New Jersey Motion Picture and TV Commission, was on one of the many recent tours he’s been taking of film and TV studios and production facilities around New Jersey. He was transported with the help of green screens owned by Cobalt Stages in Hoboken.

“It was remarkable to me what their equipment can do,” he said. “You really get the understanding that you can make a movie anywhere, without ever leaving a warehouse.”

Champions for the potential of New Jersey to compete with Hollywood — Gorelick and others — have long begun their praise of the Garden State by listing off its varied scenic settings: beaches, mountains, farmlands and more.

Well, it has all that still. But the industry wants the French villages, apocalyptic cityscapes or any of the other settings a New Jersey warehouse-turned-studio can morph into.

And that’s not all. The industry wants the costumes, the props and the equipment to accompany the special effects.

That’s what New Jersey has been adding as complementary pieces to other necessary building blocks, such as studios and production facilities, according to Gorelick. In the past year, he said, New Jersey has added three studio complexes and a host of other industry businesses.

He’ll still heap praise on the state’s outdoor filming locations. But most film and TV productions can only do so many shots of a beach. Especially when it’s raining.

“Having the combination is nice, but you definitely need to have the studios,” he said. “If you have a television series shooting 22 episodes, shooting over many months, you need to have sets you can go to any time.”

There’s more studios, more supporting infrastructure already on the way in New Jersey, Gorelick added. At the same time, his organization recently reported that overall in-state production spending from filmmaking exceeded half a billion dollars in a still pandemic-stricken 2021. That record year is on track to be bested in 2022, Gorelick said.

New Jersey Economic Development Authority leaders credit much of that growth to the film and television tax credit Gov. Phil Murphy signed into law in 2018 and later expanded. Darryl Isherwood, who acts as the NJEDA’s sector lead for film and digital television, said that, before that move, proceeds from the sector stood at around $70 million.

“The (growth since then) has taken place without any of these major studios in New Jersey yet, and just a number of smaller and midsized studios,” Isherwood said, adding figures could “easily hit a billion dollars” within several years, as more of larger studios come online.

NJEDA CEO Tim Sullivan added that studio construction is a key to “long-term durable job creation in the sector.”

“It’s great when Steven Spielberg films ‘West Side Story’ in Paterson (and Newark),” he said. “We love that. We couldn’t want that more. But those types of assignments come and go for the technical people who work on a movie, for craft service providers, security folks, lighting people, electricians — overwhelmingly union jobs, by the way.”

That’s why, if the point is to have an industry with family-sustaining careers, as Sullivan described them, it’s going to take building more studios.

And, to sustain the steady diet of work in the sector that’s being hunted for in the state, there’s a recognized need to put more effort into workforce development programs, as well.

“That way, when the call goes out, the talent is available,” Sullivan said.

State leaders are persuaded resources put into local workforce training and business incentives will be worthwhile. They point to the years-long content boom across traditional mediums and streaming services that’s fueling more demand each year for media production.

After rumors and rumblings, Netflix officially put in a bid earlier this year for what could become New Jersey’s largest media production facility.

The bid was for a parcel at Fort Monmouth, a decommissioned U.S. Army base. While it’s not a certainty the agency tasked with reviewing the several submitted bids for the site will select the streaming giant, Steven Gorelick of the New Jersey Motion Picture and TV Commission said it could be “huge” for the state’s budding industry if that happens.

“That was a former Army base, and, when you decommission a base like that, it has an effect on the economy of an area — with all that’s based on the presence of that base and the functions that go on there,” he said. “This is like building a whole new Army base, with the potential for hundreds or thousands of people working there.”

Details are slim at this time, but the bid reportedly proposed building a mix of soundstages, post-production facilities and filming spaces on the almost 300-acre parcel.

“That’s a Hollywood-sized studio complex — and, really, bigger,” Gorelick said. “So, you can imagine how that will affect employment in the area and the surrounding economy.”

“There will be peaks and valleys in that in the future,” Sullivan said. “But, with the demand for a variety of content in the world, it’s going to be a steady growth engine. We want to make sure we get our fair share of that — and then some — here in New Jersey.”

It’s impossible for New Jersey to build too much studio space or invite too many film production companies to meet that demand. The minute a new studio is built today, Gorelick said, its calendar is booked with projects for at least the remainder of the year.

“We’ve had a huge influx of production, with an array of (TV and feature film) projects,” Gorelick said. “We’ve got big productions here now, medium and small — all of it.”

If you count television series and streaming service productions, Gorelick said there’s a year-to-date total of 30 noteworthy projects featuring New Jersey on the credit roll. That number climbs to 100-plus if you factor in content such as music videos and commercials.

Some of those projects are giving new life to facilities — including the more than 40-year-old Meadowlands Arena, which has become a shooting location for a spinoff series based on AMC’s “The Walking Dead.”

Along with that are the new businesses to the region. One of those is Phiphen Studios, an independent film and television production company that’s opening an Englewood Cliffs center for postproduction work in August.

The presence of a facility like that, another Gorelick has toured, is a testament to companies recognizing that there’s loads of room to grow New Jersey’s film scene.

And, like these new state-of-the-art facilities, it holds potential that maybe isn’t as obvious from the outside.

“When you see the 70,000-square-foot stage space of something like Caven Point (by Cinelease Studios, the state’s largest film studio), the sheer size of these facilities can be overwhelming,” Gorelick said. “To someone on the outside, you might just look at it like vast, cavernous, empty spaces — but, to someone in the industry, these buildings are things of beauty.”