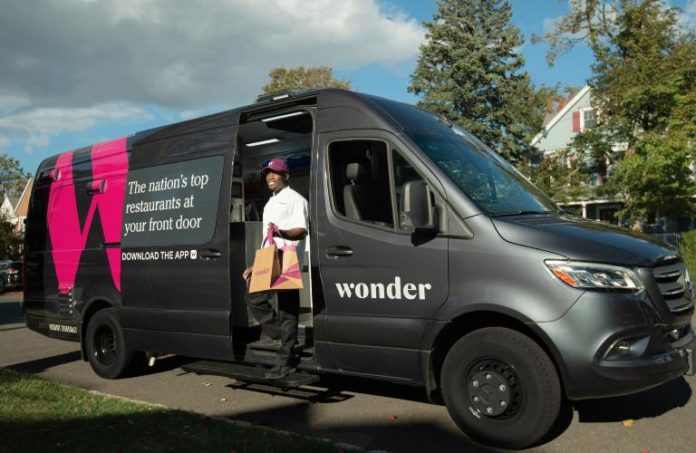 You might not recognize the Halloween costumes Andrew Gasper described some New Jersey kids wearing last fall: They were black and purplish vans with the letter W stamped on the side.

Gasper would recognize them right away. And he thinks you might one day, too.

They were a miniaturized fleet of Wonder vehicles, a food-tech startup that’s offering to bring a mobile kitchen straight to your doorstep, to cook and serve you food as freshly made as food delivery can be. And Gasper, chief governance officer of the company, has a few arguments for why it’ll be the next big thing — including that it’s winning festive fans in New Jersey.

The business is the brainchild of Marc Lore, who founded two e-commerce companies in New Jersey, Diapers.com and Jet.com, that were sold to Amazon and Walmart, respectively. The billionaire founder of Wonder also was a former CEO of Walmart U.S. e-commerce and is part-owner of the NBA’s Minnesota Timberwolves.

The company has been in the early stages of its New Jersey introduction for several years, navigating the changed environment of a food industry-reshuffling pandemic that the concept preceded. There have been a few other roadblocks, such as the difficulty of finding workers.

Nothing about that has shaken the belief of the startup’s leaders that they’re building the “next generation of the restaurant chain.”

“Our goal is bringing more food to more people,” Gasper said. “And we’re excited to start that in New Jersey. We’re also very proud of the fact that we’re bringing a lot of jobs to New Jersey. We really see ourselves as a growth engine.”

If there’s a David and Goliath narrative here, Wonder leader Andrew Gasper certainly isn’t taking the side of the giant … and he’s not pitting the company against any underdog food businesses.

Gasper conveyed that it’s a misconception that these big-time investments into bringing cuisine curbside will come at the cost of Jerseyans’ enjoyment of already-existing small restaurants.

“We’re additive to the (local restaurant scene),” he argued. “We’re not replacing dining out in towns’ great restaurants. We’re focused on those in-home nights of dining.”

The proof is in the pudding: Customers can taste food from local restaurants along with the Wonder menu offerings. They’re doing so through a courier service called Envoy.

“It’s part of the same company, differentiated by the branding,” he said. “It’s our answer in many ways to services such as DoorDash and Uber Eats. It’s something we’re doing in the towns we’re already embedded in.”

Wonder’s foothold in the local market — and its food bank contributions as well as other local give-back initiatives — differentiates it from those other food delivery services, Gasper said. The startup is also scrapping some of the mark-up fees of national food courier businesses.

“The idea (of Envoy) is to make sure people want to go to us first when they want a great meal at home,” he said.

And that engine is revving. The pandemic has turbocharged venture capital interest in the startup, Gasper said. And it also accelerated a customer preference for tech-based, on-demand food options.

Riding those trends, the company has grown to about 1,300 New Jersey employees. By the end of the year, their models indicate they might have another 500 to add to that total.

Included in that employee count is what Gasper refers to as a “whole new category” of worker, the chef on the road. They’ve even got an acronym, “COR.” And, when you have 600-plus people employed in the same new role, why not?

And it’s far from the end of the road for the company. Aside from the extra employees they’re adding this year, the company plans to hire many more over the next few years.

The company sees a clearer path in the future to hiring those workers. Up until now, Gasper explained, hourly workers with the right mix of hospitality, culinary, food safety and, of course, driving skills haven’t been the easiest to find.

Those at the company have had to sharpen their own skill sets in locating that worker in a notoriously difficult time for locating talent.

“What we’ve tried to do is focus on hospitality-first people who are energized by the job, because we can quickly teach them everything else,” Gasper said, adding that the company has sought help in its recruiting from Rutgers University and community colleges, as well as local job seeker support organizations such as NewarkWORKS.

In a 100,000-square-foot “culinary research and engineering” facility in Parsippany, the company has around 115 food scientists tweaking famous recipes of chefs, trying to make them just as tasty when served from a mobile kitchen as a regular one. Many are former chefs themselves.

“Either because some saw restaurants shut down during the pandemic, or just reacting to a trend, they wanted to be in front of a potential next step in a career in the art of serving food,” Gasper said.

Instead of tinkering with vials and petri dishes, these food scientists are working out the right formulations of pizza doughs or the right seasonings of a steak — the sort you might find at Bobby Flay Steak in the celebrity chef’s restaurant at the Borgata casino in Atlantic City.

Flay is just one of the chefs who have put their names behind Wonder’s 20 exclusive menus. Others include Daisuke Nakazawa of New York’s Sushi Nakazawa and Los Angeles restaurateur Nancy Silverton, who Gasper referred to as a chef regarded as one of the country’s best.

Wonder is busy finding ways of replicating what these chefs cooked up in lauded restaurants in a way that can be quickly prepared in its vehicles. Most of the ingredients for those meals are actually brought together in a Cranford kitchen commissary before they’re finished and plated outside customers’ homes.

As it grows its mobile fleet — which can number 150 vehicles in rotation on a given day — the startup intends to bring more renowned chefs on-board.

“The goal is really to have great food at diverse ranges and price points to offer through our mobile vehicles,” he said. “Our customers are really craving that variety.”

But it wants to get that area perfected, he added, before it enters into the larger northeastern region. New markets will pose new logistical challenges, including the need for more labor and more commissary kitchens.

“When we’re not in a town yet (but planning expansion there), the waiting list in the next town builds up quickly,” Gasper said.

That’s one of the ways they know they’re onto something, he added. Because the reception the company is getting so far …

According to them, it’s nothing short of wonderful.

“Whether it’s chefs who are excited and can’t believe we’ve been able to achieve the same level of food quality as their own restaurant’s steaks or pizzas … or people coming up and saying they’ve been able to treat their whole family to an exciting night,” he said. “Towns are enjoying food right at their door.”

Chick-fil-A to open location in Linden on Wednesday