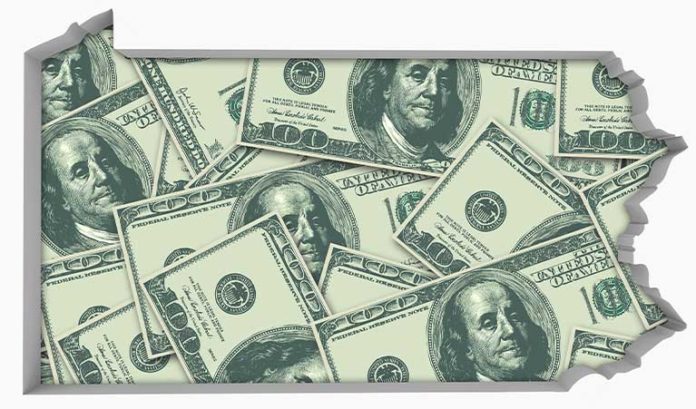 The state budget includes an additional $1.8 billion increase in funding for education, an additional $2.1 billion deposit in the Rainy Day Fund (pushing that total to just under $5 billion), $540 million for water infrastructure and water pollution projects and $150 million for costs related to nursing home staffing.

In fact, the $45.2 billion budget that was passed and signed earlier this month in Pennsylvania appears to be much like New Jersey’s — until you get to the part that talks about business tax.

Some in New Jersey are asking the obvious question: Why not here?

“Pennsylvania is doing the right thing: They’re lower taxes on the business community in a way that makes sense,” Tom Bracken, the CEO of the New Jersey Chamber of Commerce said.

“More than that, they are sending the right signal psychologically, knowing that taxes are such a huge issue with everyone. It just says something about the way the Pennsylvania Legislature and governor view business.”

Pennsylvania Gov. Tom Wolf said all that and more after signing the budget.

Wolf never uttered the words “fairer” or “stronger” — but he made it clear that he felt being fair to business would be a strength for all.

“In Pennsylvania, our Corporate Net Income Tax is one of the highest in the nation, and it’s holding our commonwealth back,” he said. “Businesses are asked to pay more than their fair share. It’s a barrier to new business growth and limiting opportunities for our workers and new student graduates.

Murphy’s spokesperson, Alyana Alfaro, did not answer a question about the corporate business tax directly. Instead, she detailed Murphy’s efforts to help business.

“Gov. Murphy believes that we must take smart steps to make our state more affordable and continue helping businesses recover from the impacts of COVID-19,” she said. “The administration has dedicated an unprecedented amount to support small businesses and spur economic recovery since March 2020.”

State Sen. Steve Oroho, the Republican leader from Sparta, said the state has not done enough.

A Certified Financial Planner by trade, Oroho said he sees the impact of tax policy every day in his job — as his office is close to both the Pennsylvania and New York borders.

He wishes Murphy had the same view.

“For a guy who worked at Goldman Sachs, he doesn’t seem to get it,” Oroho said. “You can easily take a business to Pennsylvania. It’s essentially the same location and the same workforce.

“The effect of this could be felt for years.”

Some say it’s already being felt.

CNBC, in its annual survey of the best states for business, had Pennsylvania ranked No. 17. New Jersey was ranked No. 42. And that was before Pennsylvania announced its tax cut.

What can be done to change that?

For starters, New Jersey doesn’t need to lower its corporate rate as much as it just needs to sunset the 2.5% increase to 11.5% it enacted in 2018 — before the state was flush with cash.

New Jersey Business & Industry Association Vice President of Government Affairs Chris Emigholz said the state needs to start seeing how it’s viewed in comparison to others — because that’s the way it is viewed by businesses.

“That CBT reduction rate to our next-door neighbors in Pennsylvania should definitely serve as a wake-up call to Gov. Murphy and our policymakers,” he said. “That’s a big advantage for any corporation looking to land or expand in this immediate area.”

“We should also recognize that, if the CBT surcharge does not sunset as it should at the end of 2023, then that’s a tax increase, which goes against the governor’s pledge of no new taxes in his second term.”

State Sen. Declan O’Scanlon, the Republican budget officer from Holmdel, said what is going on in Pennsylvania cannot be ignored.

He can only hope that it will be emulated — but he’s not confident.

“Democrats in New Jersey, led by our governor, don’t think tax rates impact business decisions,” he said. “To borrow a term from another high-ranking Democrat, that’s a huge steaming pile of malarkey.”

Taxes are hurting businesses and the state, O’Scanlon said.

“Our current rates tops out at 11.5%,” he said. “Anyone who says that’s not negatively impacting our economy is outright lying, or woefully lacking in an understanding of basic economics.

“We should be taking steps to grow our economy. Instead, we’re watching a neighboring state take advantage of our utter foolishness.”

Murphy details plans for testing (25K a month in June) and...

Republicans reject Murphy’s budget — but will their voices be heard?