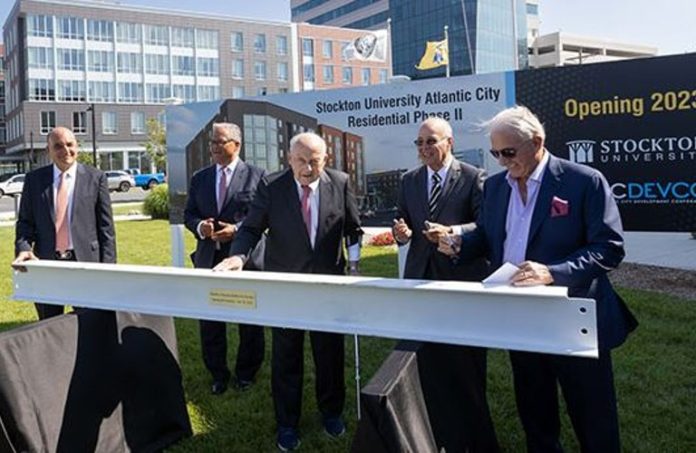 Stockton University marked a milestone in the construction of the second phase of its Atlantic City campus and recognized one of the key project champions during a topping-off ceremony July 19.

Stockton and community leaders who were instrumental in the development of the Phase II Residence Hall signed a steel beam that will be placed in the building, which is planned to open in fall 2023.

Additionally, President Harvey Kesselman and Provost Leamor Kahanov bestowed an honorary Doctor of Public Service degree upon Jon F. Hanson, founder and chairman of The Hampshire Companies and chairman of the board of the Atlantic City Development Corporation (AC Devco), which developed the 2018 Gateway Project in Atlantic City that includes the Stockton Atlantic City campus.

“I am deeply proud of the work that AC Devco has already accomplished to create opportunities for transformative real estate investment in one of New Jersey’s most important cities,” Hanson said. “I would like to thank Stockton University for this recognition, and I look forward to continuing to work closely with them and our partners to continue to execute our vision for Atlantic City.”

Harvey Kesselman with Stephen Sweeney and William GormleyKesselman praised Hanson’s support of the university and the city to create the public/private partnership. “He is an individual who has dedicated his life to making a positive impact in his profession and his community, he said. “We would not be here without the dedication of Jon Hanson and his effort to bring Stockton to Atlantic City and diversify its economy.”

The six-story, 416-bed residence hall is under construction at Atlantic and South Providence avenue in the University District, across from O’Donnell Park.

The 135,000-square-foot building will feature apartment-style living. There will also be a lounge, meeting room and laundry facilities. Residents will have access to parking in the existing parking garage.

Kesselman said the $69.3 million expansion is just another step in the university’s commitment to the city and role as an Anchor Institution dedicated to attracting a diverse and educated workforce.

“As Stockton increasingly becomes the No. 1 choice for students from around the state and beyond, Phase II is critical to meeting this demand for a high-quality, student-first education,” Kesselman said.

Christopher Paladino, president of AC Devco, reflected on bringing both Phase I and II to fruition. “Chairman Hanson and President Kesselman shared a vision, and it breathed new life into the city,” he said. “The investment has changed the tempo of this neighborhood and has brought 4,000 people to live, study, teach and work in the Chelsea neighborhood.”

“This expansion pays homage to our start in Atlantic City,” said Raymond Ciccone, chair of Stockton’s Board of Trustees and Stockton alum, referring to the university’s opening days at the former Mayflower Hotel in Atlantic City.”

Three of N.J.’s colleges are among world’s best, report reveals