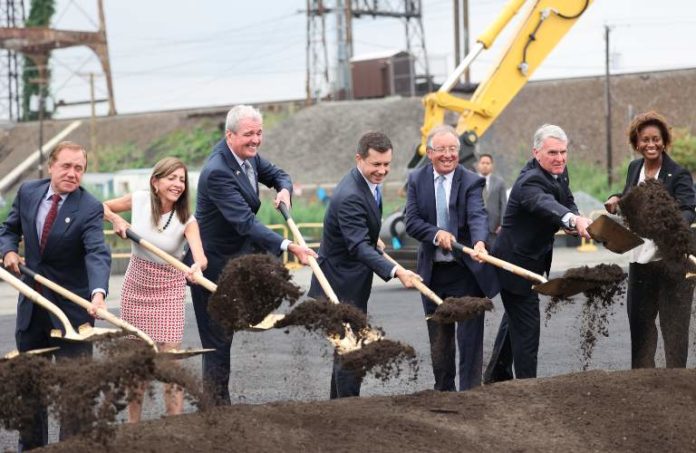 In another milestone movement in the journey toward the opening of the desperately needed Gateway Tunnel project, Gov. Phil Murphy, Transportation Secretary Pete Buttigieg, New Jersey Transit head Kevin Corbett, Amtrak Chair Tony Coscia and host of other officials gathered for a groundbreaking of the new Portal North Bridge on Monday in Kearny.

Construction of the new Portal North Bridge will greatly reduce gridlock caused by critical operation and maintenance issues of the existing 110-year-old swing bridge and improve service, reliability and capacity for rail travel along the Northeast Corridor.

The Portal North Bridge project is a critical component of the larger Gateway Program, which will eventually double rail capacity between New Jersey and New York. It will span 2.44 miles of the Northeast Corridor line and includes construction of retaining walls, deep foundations, concrete piers, structural steel bridge spans, rail systems, demolition of the existing bridge and related incidental works.

In October, Murphy and NJ Transit announced the approval of a $1.56 billion construction contract awarded to Skanska/Traylor Bros PNB Joint Venture. The Notice to Proceed given to STJV in April signified the start of the construction contract, which is anticipated to take approximately five and a half years to complete.

Buttigieg said the groundbreaking is more evidence that the country is entering a “true infrastructure decade,” as he put it.

“This project turns the Portal North Bridge from a chokepoint to an access point,” he said. “It modernizes the way that people and goods get to and from this region that is responsible for 20% of America’s economic product every year.

“I hope that this bridge will not only bring people to work and loved ones to where they need to be, but brings renewed confidence in our ability to get things done together.”

The current Portal Bridge will be replaced with a new modern two-track, high-level, fixed-span bridge that will improve service and capacity along this section of the Northeast Corridor. The new Portal North Bridge will rise 50 feet over the Hackensack River and will allow marine traffic to pass underneath without interrupting rail traffic.

The Portal North Bridge project will eliminate the 110-year-old swing bridge, which has been the enduring source of major service disruptions for NJ Transit and Amtrak customers traveling on the Northeast Corridor.

The project is being funded by the U.S. Department of Transportation, New Jersey, New York and Amtrak. In January 2021, Murphy announced the signing of a Full Funding Grant Agreement, which secured $766.5 million in Federal Transit Administration funding to support the project’s construction.

Coscia said the significance of the day cannot be overstated.

“Having shovels in the ground means that the planning and talking are over,” he said. “It’s time to build state-of-the-art infrastructure and make rail travel more reliable to the region’s train travelers.”

Greg Lalavee, business manager of the International Union of Operating Engineers Local 825, stressed that the project will create thousands of high-paying jobs.

“The ripple effect of a job like this is profound,” he said. “The workers involved in this project are grabbing their part of the American dream, all because of what these public officials have brought here today.”

Murphy said the project is a moment of triumph for the region and the state.

“The new Portal North Bridge symbolizes our lasting legacy and our commitment to the welfare and prosperity of all New Jerseyans,” he said.