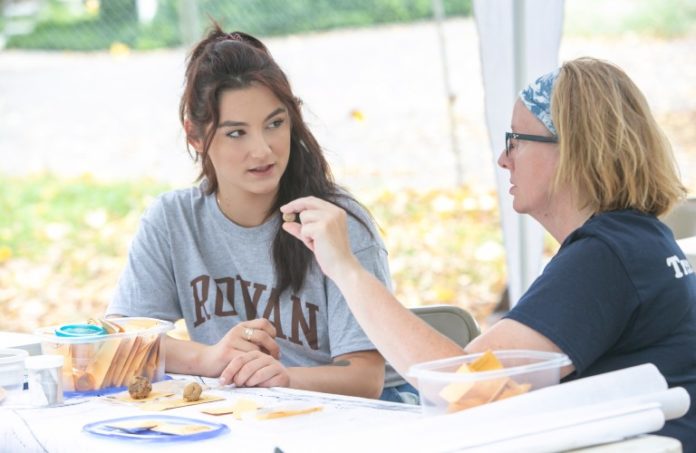 Gloucester County and Rowan University officials, along with professional archaeologists, announced the discovery of what researchers believe are the remains of Hessian soldiers killed during the 1777 Battle of Red Bank during the Revolutionary War at Red Bank Battlefield Park, 100 Hessian Ave.

In June, during the final hours of a public archaeology dig at the site of the battlefield’s Fort Mercer trench, a human femur was discovered. Additional excavation of the trench uncovered skeletal remains of what are believed to be as many as 12 individuals killed on the battlefield on Oct. 22, 1777 — some 245 years ago.

The public dig also uncovered items related to the battle, including: a rare 1766 King George III gold guinea, the equivalent of a soldier’s salary for a month; a knee buckle from a uniform containing fabric and human blood; pewter and brass buttons; and musket balls and other ammunition.

All of the remains have been excavated and turned over to the New Jersey State Police Forensic Unit. There, forensic anthropologists are extracting DNA from the bones and teeth to identify their origin.

Skeletal assessment, isotopic, genetic and radiological analyses are also ongoing to provide in-depth analysis of the human remains and to gather biological data and indicators of life history, health and disease, and other factors. The remains have been excavated with extraordinary attention to preserving the dignity of the war dead.

“We’re hoping that eventually, perhaps, we can find some of these individuals,” said Rowan University public historian Jennifer Janofsky, director of Red Bank Battlefield Park. “If we can extract their stories, and if we can tell their stories, it lets us put a name to a face. And that, to me, is a very powerful moment in public history.

“History is an ongoing process. It’s not like we’ve written the Battle of Red Bank and we know everything that happened. Archaeology is helping us better understand what happened on the battlefield. Now, we have a better opportunity to tell a more complete story of these individuals. … Who were they? Why were they here? What was their fate? It gives the public a more nuanced understanding of the history.”