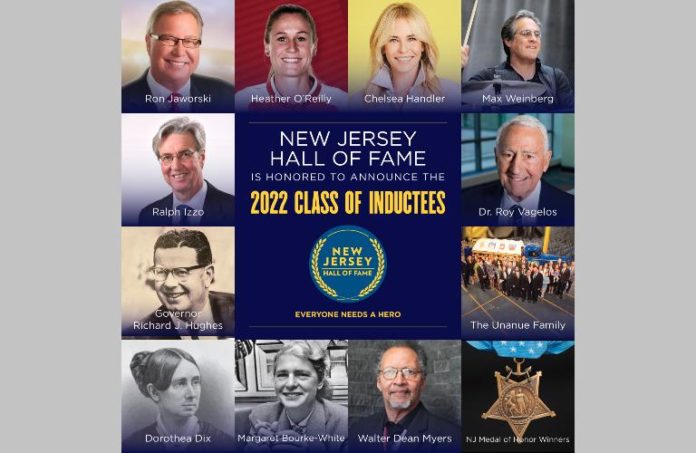 Ralph Izzo, the chair and CEO of Public Service Enterprise Group, Dr. Roy Vagelos, the former chair and CEO of Merck, and the Unanue family, founders of Goya Foods, are the business leaders among the 14th class of honorees of the New Jersey Hall of Fame, the organization announced Tuesday afternoon.

The inductees showcase the wide-ranging talent of the Garden State as the 10-member class includes a number of well-known athletes, entertainers and political figures.

Heather O’Reilly, an East Brunswick native who began playing for the U.S. Women’s Soccer National Team while she still was in high school, is the youngest, at 37.

The 14th Annual Induction Ceremony, which will be virtual, will be broadcast on My9NJ and on NJ PBS, radio and prominent social media platforms. No date was announced.

Here’s a look at the honorees, listed by categories. Those with an asterisk are being inducted posthumously:

Jon Hanson, the chairman of the Hampshire Cos. and the Hall of Fame (and a former honoree), saluted those honored.

“New Jersey is never at a loss for heroes and role models for coming generations,” he said. “We are honored to celebrate the lives and contributions of these notable New Jersey luminaries throughout the state, at our terminals and Parkway service areas, and, next year, at our Entertainment and Learning Center at American Dream.”

Izzo, who is retiring at the end of the year, has been chair and CEO of PSEG since 2007. He is a well-known leader within the utility industry, as well as the public policy arena. He is frequently asked to testify before Congress and speak to organizations on matters pertaining to national energy policy.

His career began as a research scientist at the Princeton Plasma Physics Laboratory, performing numerical simulations of fusion energy experiments. He has published or presented more than 35 papers on magnetohydrodynamic modeling.

Vagelos was named CEO of Merck in 1985 and chair in 1986. He has served as chairman of the board of Regeneron Pharmaceuticals since 1995.

In addition to his business accomplishments, Vagelos is the author of more than 100 scientific papers.

Goya Foods, headquartered in Jersey City, is the largest minority-owned food company in the country. Family-owned, it is in its third generation of leadership under CEO Robert Unanue. Last year, it had revenues of more than $1.5 billion.

Devils’ first playoff appearance since 2012 will bring economic boost to...