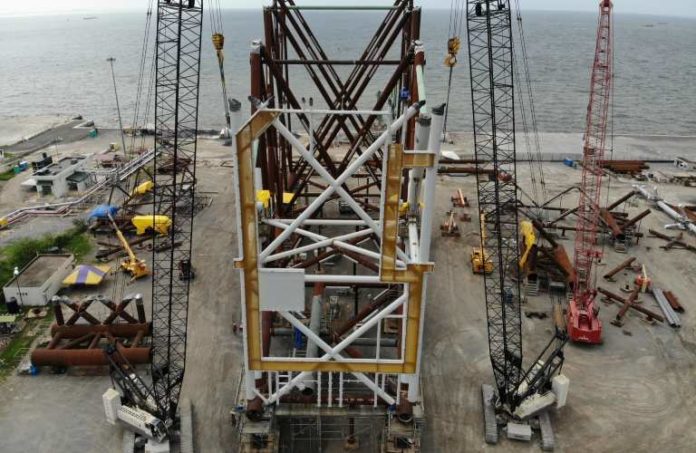 Atlantic Power Transmission and Morrison Energy will announce Wednesday their intention to partner on a project to develop a manufacturing facility in New Jersey that potentially could produce the massive, 200-feet-tall, 5,000-ton jacket foundations that are used to support offshore wind substations.

Bringing this manufacturing to New Jersey — the jacket foundations currently are produced only in Europe or Asia and have to be shipped to the U.S. — would further help New Jersey establish itself as a supply-chain leader on the East Coast for the emerging offshore wind energy sector.

APT, which is backed by Blackstone, and Morrison also said they will work with local unions on the project, creating programs that develop the next generation of workers to help manufacture the jacket foundations and participate in other aspects of the offshore wind energy sector.

The partnership and the plan — which adds context to APT’s May announcement that it is prepared to invest $50 million in workforce development in the state — is contingent upon APT being selected to be the transmission provider of offshore wind for the state.

Atlantic Power Transmission is one of 13 companies that is bidding for the massive project that is intended to bring the energy created from all future offshore wind projects onto land and into the power grid.

It is not clear where the manufacturing facility will be located — the two companies are working with their union partners to find the best location. And, while it’s too early to estimate the possible number of permanent jobs the facility will bring, the presence of such a facility figures to be a huge value-add for the state’s efforts to take a leadership role in the sector.

Offshore substations collect and export the power generated by wind turbines through specialized submarine cables — convert it to a useable form of energy — and then send it to shore in a subsea cable.

Offshore jacket foundations, a connection of crisscrossed support beams that have the structural integrity to hold an 8,000-ton substation, are an essential component of offshore wind farms, especially at large, multimegawatt sites, since they help secure the substation to the ocean floor.

Atlantic Power Transmission CEO Andy Geissbuehler said the ability to produce jacket foundations in the U.S. could be an economic game-changer for the state.

“This is something that goes way beyond our New Jersey project,” he told ROI-NJ. “This is about starting a large-scale foundation industry on the East Coast.”

Geissbuehler, a veteran of the offshore wind industry, said he’s delighted to work with Morrison and their union partners on the project.

“Morrison is a leader in the energy sector, with an exceptional management team,” he said. “I’m thrilled to work alongside Chet Morrison and Kirk Meche, who bring four decades of experience as thought leaders in the energy industry.

“Partnering with Morrison will bring the industry expertise needed for this project and invest in training our local workforce to secure New Jersey’s position as a wind leader for decades to come.”

William Sproule, executive secretary-treasurer of the Eastern Atlantic States Regional Council of Carpenters, said his union ready to partner on the project.

“The EAS Carpenters are encouraged by how APT and Morrison have seized this opportunity and are focused on plans to train and prepare New Jersey’s highly skilled tradesmen and women for future industries in our state,” he said.

“Our union has been committed for over a century to training the most skilled construction workers in the country, highlighting that fact by the recent expansion of our existing Hammonton, New Jersey, training center and opening the first union dive school in the country to meet the needs of the new offshore wind industry. The additional relationship of the EAS Carpenters with preferred partners, APT and Blackstone, will bring opportunity to New Jersey skilled tradesmen and women for years to come.”

“APT and Blackstone have been the ideal partners, not only to IUOE 825, but New Jersey labor generally,” he said. “They have proactively sought opportunities to train and credential our collective brotherhood in the skills needed for the transition to offshore wind. We are excited to collaborate with APT and Morrison on this new, groundbreaking initiative.”

The future of foundation jackets in the industry is bright, Geissbuehler said.

He sees a future in which the jacket foundations could be used to support the ever-growing-in-size wind turbines. He also sees the possibility of a next-generation model of jacket — one that floats — being created. A foundation that could float would enable offshore wind companies to move farther offshore.

“There’s a lot of similarity between building an offshore jacket foundation and building offshore floating foundations,” Geissbuehler said. “I think this could be the start of a very impressive industry, with New Jersey in the lead. We’re really proud to drive this forward.”

So is Chet Morrison, CEO of Morrison.

“Morrison is committed to the development of offshore wind energy in the United States by supporting APT’s partnership in developing New Jersey’s union workforce with skilled workers who can propel the New Jersey wind energy sector forward for decades to come,” he said.