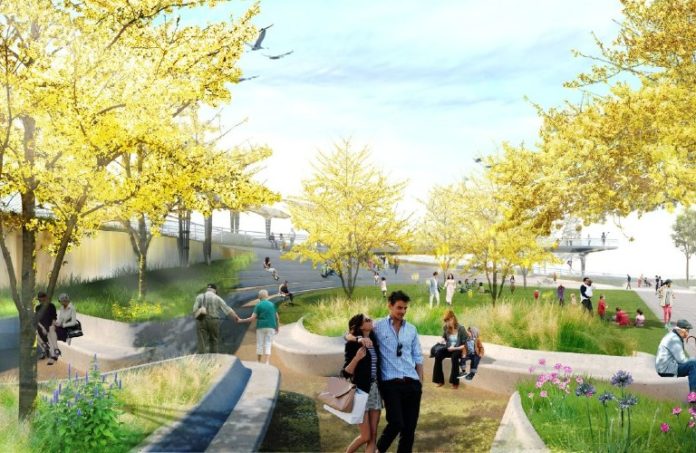 The Rebuild by Design project to protect Hoboken from flooding was recently awarded an additional $100 million by Gov. Phil Murphy and the state of New Jersey through the state’s yearly budgeting process.

The funding will be utilized for construction costs associated with the Rebuild by Design project, including the above-ground flood mitigation infrastructure at Harborside Park, transforming it into a resiliency park at 15th and Garden streets that will protect Hoboken from rising sea levels and storm surge from the Hudson River.

“To say that I am extremely grateful to Gov. Murphy and his team for this historic funding would be an understatement,” Mayor Ravi Bhalla said in a statement. “Make no mistake about it, the $100 million to bolster our defense against rising sea levels and storm surge events will help ensure that our Rebuild by Design project will have the necessary funding to be seen through to completion.”

After soliciting input from residents through community engagement sessions, the final design of the three-acre park includes above-ground amenities including a dog run, passive lawn areas, playground space, a waterfront plaza, seating areas and more. The park will become the first park in New Jersey with elevated flood protection features.

The Rebuild by Design project, which broke ground in the fall of 2021, recently saw the completion of the replacement of underground sewers in portions of north and south Hoboken. The new sewer system will help prevent storm surge from breaching Hoboken underground and will complement the above ground “resist” features of the project.

The first phase of funding for the Rebuild by Design project includes $230 million in federal funding through the Department of Housing and Urban Development.

Construction on Harborside Park is scheduled to begin by the spring of 2023.