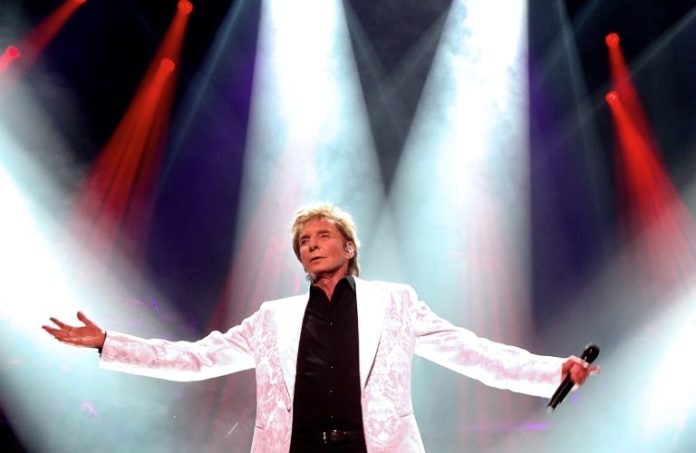 Hand it to Barry Manilow. The legendary adult contemporary performer not only is still performing — he’s 79 — he’s still doing his part to make sure the next generation of musicians get a chance to learn the craft.

(For tickets to the show — and the prices are not causing a commotion — click here.)

The award is part of the Manilow Music Project, which has been supporting young musicians and music programs for more than three decades, donating more than $10 million.

On Friday, Exposé will receive a $5,000 cash award and another $5,000 in “Manilow bucks” to purchase music instruments for the Newark school’s music program. Prudential Center has partnered with Manilow’s Music Project by providing an additional $10,000 donation to the winning teacher’s school.

Exposé, who was selected through a polling process, said he was honored — and immediately gave thanks to others.

“I am blessed and humbled to have a loving and supportive family, great friends, students, staff and community who were behind me and believed that I was worthy of this award for my commitment and dedication to education,” he said.

“An award such as this recognizes the hard work and achievements that some teachers never receive. This is a great opportunity for our school, district, community and myself. I hope it encourages all of us to embrace the arts and move us to the front line — and not be the first budget line to cut when the funds are tight.”

Exposé gave special thanks to Manilow and the Prudential Center.

He wrote the songs

Barry Manilow, appearing Friday night at the Prudential Center, has had 27 Top 10 hits in his career — many of which came in the 1970s, when he dominated the airwaves. Here are five of the biggest:

“The real accolades go to Mr. Manilow and his foundation for providing this opportunity to purchase musical instruments for our students — along with Prudential Center, who provided matching funds for East Side High School,” he said.

“We are very much appreciative for the additional contribution that will help us purchase needed equipment and supplies — instead of waiting for years to go by and purchasing in small increments. There are too many instances when schools do not have enough instruments, or none at all, for students to play.”

Manilow said he’s thrilled to be able to give back to those who are teaching the craft.

“It is wonderful to partner with our concert venues to identify schools and music teachers in their neighborhoods that deserve this small token of my gratitude,” he said. “Many school music programs have either been terminated, or their funds have been severely depleted. I always want to do my part through the Manilow Music Project to keep music in schools.”

“Prudential Center is very proud to partner with Mr. Manilow on such a great cause for the city of Newark,” he said. “The platform that he provides these young music students is unparalleled, and we are happy to be a part of such a terrific program.”

Manilow’s career is made up of virtually every facet of music, including performing, composing, arranging and producing — efforts that have led to him winning multiple Grammy, Emmy and Tony awards. He has sold more than 85 million albums worldwide — and has had 50 Top 40 singles, including 12 No. 1 songs.

Throughout it all, he credited much of his success to public schooling programs he had while growing up in New York City.

The Manilow Music Project has donated thousands of instruments — including hundreds of brand-new Yamaha pianos — to hundreds of schools across the country. It also has supported young musicians by offering merit- and need-based scholarships to universities all over the U.S.

The Manilow Music Project is largely funded by proceeds from Manilow’s VIP Platinum Experience, for which participants get front row seats to the show and a meet-and-greet with the artist. It accepts contributions as well. (Learn more here.)

Restaurants need to reapply for permits (by Dec. 1) to continue...