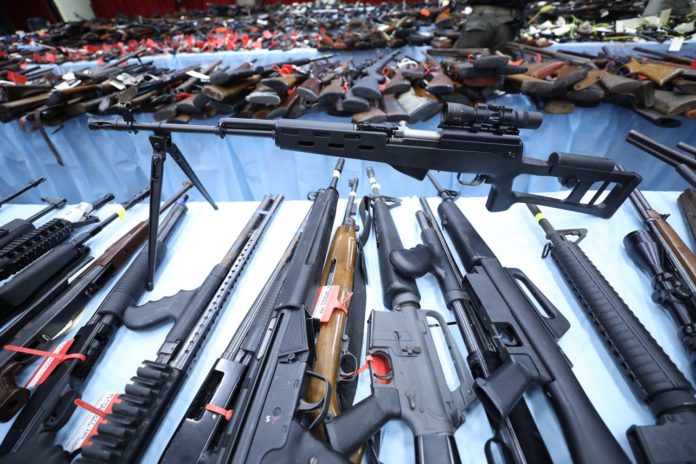 Police arrested the marketing director of Hudson Regional Hospital in Secaucus at Newark Liberty International Airport this past Sunday with assistance from the United States Department of Homeland Security Investigations after officials discovered 29 rifles and 11 handguns in an unlocked closet in an office within the hospital facility.

According to Secaucus Patch, which first reported the incident, an investigation began after a bomb threat was called in to the hospital on July 18 at 3:10 p.m. Several other bomb threats were called to various locations around the state that afternoon, including at the Hoboken ShopRite.

As officials responded to the threat at Hudson Regional Hospital, a bomb-sniffing dog “gave a positive indication on an unlocked closet within an office,” where a weapons cache was discovered hidden inside that contained more than three dozen firearms, according to multiple published reports.

Upon entering the closet, police discovered 11 handguns of various calibers, 27 rifles/shotguns, and a Kriss Vector .45 caliber semi-automatic rifle with a high-capacity magazine that was “determined to be an assault rifle,” police said.

They also seized a 14 round high-capacity handgun magazine.

“During a search of Hudson Regional Hospital related to a bomb scare hoax, firearms were discovered in a locked office on an administrative floor of the hospital that was occupied by a non-employee consultant. The items were immediately removed from the site and were impounded by Secaucus Police, who found no other presence of firearms in the building. Law enforcement subsequently has not approached Hudson Regional Hospital at any level regarding any legal issues related to the impounded items. If requested, we will provide further support to law enforcement regarding the continuing investigation into this matter.

The presence of weapons in a hospital is inexcusable beyond comprehension and contradicts our mission of care and our commitment to the safety of our community of staff, patients and the extended community. While regrettable, this incident has given us occasion to review security protocols and we have taken steps to assure that it will never happen again.”