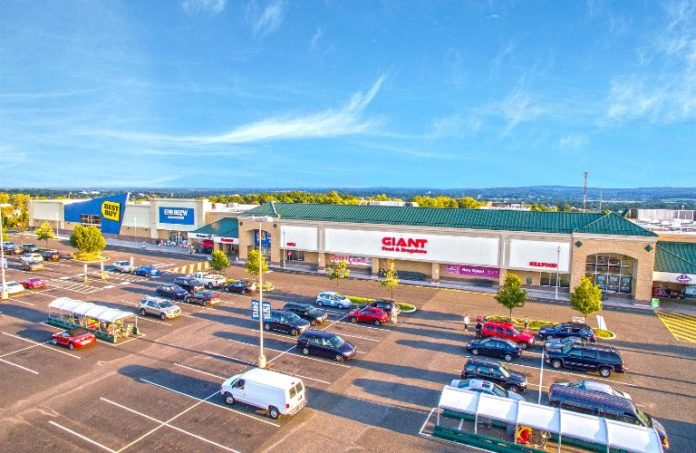 One of the Philadelphia metropolitan statistical area’s largest and most successful grocery-anchored power centers was just acquired by United Hampshire US REIT, a Singapore real estate investment trust sponsored by UOB Global Capital and The Hampshire Companies, according to a Monday announcement.

Known as Upland Square, the property is a 400,674-square-foot grocery-anchored center located at 180 Upland Square Drive in Pottstown, Pennsylvania.

Situated in Montgomery County, the asset is currently 95% leases and has a wide range of dominant anchors including Giant by Ahold Delhaize, TJ Maxx and shadow-anchored by Target and AMC.  It also has other well-known national retailers such as Petco, Party City, Staples and Bed Bath & Beyond.

The center’s modern construction and a convenient location along Route 100 in Pottstown, along with its strong tenant lineup and historical high occupancy are furthe4r enhanced by it being located in the third most populous county in the state with a population of 836,948 and an average annual household income of $153,498.

The addition of Upland Square brings the total number of assets in the UHREIT to 23. Spanning over 3.8 million square feet, the UHREIT currently contains 21 grocery-anchored and necessity-based properties and two modern self-storage facilities along the Interstate 95 corridor.

“The eastern United States’ combination of population density and high household income have ensured it continues to stand out among the nation’s retail markets. We expect this momentum to continue over the long-term and we are excited to continue to grow our portfolio through the addition of assets like Upland Square over the next several years,” Derek Gardella, head of Investments of the UHREIT stated,

The seller in the transaction was represented by Brad Nathanson, senior managing director of Investments at Institutional Property Advisors (IPA), a division of Marcus & Millichap.

CBRE to be leasing agent for Port Logistics Center in Logan...