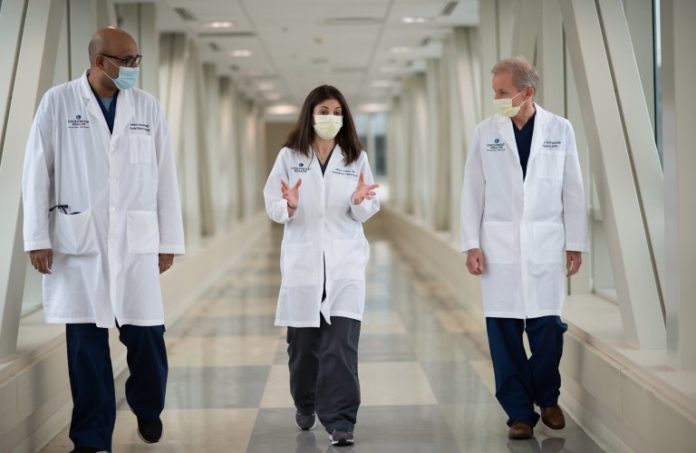 The emergency room physician, a senior vice president of medical affairs at Englewood Health, has also seen the suffering behind the numbers.

Captured in recent surveys from local and national organizations, New Jersey’s youngest residents are showing up more often to ERs and other hospital inpatient settings due to anxiety, depression, self-harm and other behavioral health complaints.

“These aren’t cases you can follow up with on an outpatient basis, these are individuals in an acute mental health crisis that requires hospitalization,” she said. “And these also aren’t patients who are 16, 17 or 18 years old, it’s increasingly those 10, 11 and 12 years old in which we’re seeing a higher level of acuity.”

Cohen said the bump behavioral health providers are experiencing in the volume of youth and adolescents in crisis exceeds pre-pandemic levels. It’s not leveling off or on the retreat.

She and other sector leaders have their own ideas when speculating on the reasons for it, with all acknowledging that there’s a perfect storm of factors at play that will keep this trend moving in the same direction for the immediate future.

“It’s an anxious time in the world, with enough going on that anyone might feel anxious,” Cohen said. “Youth are often protected from those realities. In a way, that bubble has burst.”

One of the state’s largest inpatient psychiatric programs, Bergen New Bridge Medical Center‘s, has seen upticks in all behavioral health service areas since the pandemic was declared just over two years ago, according to CEO and President Deborah Visconi.

There’s a constant jostling for space in the hospital’s pediatric program, a unit specialized in dealing with patients — who otherwise wind up in one of the state’s generalized emergency rooms.

Responding to the patient surge, Bergen New Bridge has introduced a clinic-based mental health program called the Hope & Resiliency Center for Youth. The program’s multidisciplinary program provides treatment for youth just discharged from inpatient settings as well as providing adolescents in outpatient programs with a more structured level of intervention.

In introducing new programs, organizations still have to contend with reimbursement from health plan payers not being what it should be for acute behavioral health care, Visconi said. That poses a secondary challenge when hiring to fill out new programs.

Debra Wentz, CEO of the New Jersey Association of Mental Health and Addiction Agencies, said that, even with Gov. Phil Murphy’s budget offering funding for the industry and its workers, it didn’t cover every professional.

As the trade association leader describes it, behavioral health reimbursement has been at the bottom of the food chain for so long, it’ll be hard to undo the sentiment expressed in a National Council for Mental Wellbeing survey from last year. To wit, 97% of behavioral health providers find it difficult to recruit, with 82% saying retention was a problem, too.

That has led to pre-pandemic staffing levels having to meet post-pandemic demand for youth mental health services. And that demand is deathly serious, Wentz said.

A New Jersey Hospital Association review found that not only are depression and anxiety increasing in those ages 12 to 17, that age group saw a 95% rise in self-harm cases between 2019 and 2021. National Alliance on Mental Illness data indicates that nearly 20% of high school students report thoughts of suicide, and 9% attempted to take their lives. Actual suicide rates in younger age brackets are trending up, according to various surveys.

“As for why that is, it’s a little bit of everything,” Visconi said. “Of course, there’s the isolation that’s been talked about from students not being in school during the pandemic, and youth not able to go out and do activities as social programs were canceled. There’s also the unemployment rates among caregivers, increased domestic violence and drug abuse affecting families.”

Exacerbating all that is the proliferation of mass shooting events, such as the May shooting at an elementary school in Uvalde, Texas, in which 19 children were slain. Wentz said that feeling of lacking safety can weigh heavily on youth.

Those events have cast a new spotlight on mental health in the country, with mixed feelings for industry leaders such as Wentz. She welcomes the funding. But it’s inaccurate, she said, to paint that funding as having a direct correlation with preventing mass shootings.

Although it might be a talking point, the link between those behavioral conditions, including serious mental illnesses such as schizophrenia, and violent behavior hasn’t been established in research literature. A 2015 study from Duke University School of Medicine and other institutions found that those with serious mental illness with no past exposure to violence or drug or alcohol use demonstrated a 2% rate of violent behavior — the same as the wider population.

“So, I feel there’s an unfair stigmatization of individuals with serious mental illness going on,” Wentz said.

There’s been magnified attention recently to mental illness disorders, experts in the sector agree. And part of that is a recognition that these disorders are coming to bear on the lives of young individuals today much more transparently.

“The bright side, if there is one, is that kids and their families are no longer viewing mental health as a stigma,” Visconi said. “They’re more willing to come in to get help.”

In practice, she adds, when divvying up the mental health budget pie, what women athletes were afforded left something to be desired.

That’s just a small slice of what the mental health sector is trying to right. For Sonaike, who was in June named chief operating officer of Cedar Grove-based Baker Street Behavioral Health, addressing inequities in access to behavioral health care tops the sector’s priority list.

Among other things, Sonaike’s organization is working to ensure sports psychologists are equally as available to female athletes as their male counterparts. To that end, one of Baker Street Health’s partnerships is with a professional local women’s hockey team, the Metropolitan Riveters.

Sonaike examines the state’s mental health landscape as a whole through an equity lens, as a field prone to disparities in the level of care afforded to individuals, particularly those in different socioeconomic groups.

“Up until very recently, people who had access to mental health care were those who could afford to pay out of pocket, with insurance covering it only if you had good insurance,” she said.

In Sonaike’s view, the pandemic only underscored existing pocketbook-tied inequities. The sector’s leaders agree that getting Jerseyans to seek behavioral health provider care is difficult enough without layering on the challenges of socioeconomic, racial and ethnic disparities.

When it comes to concrete issues, wait times for behavioral health care among Medicaid patients is a hurdle.

“Not all providers accept it, and those that do typically are not using it as the bread and butter of their practice and will cap the number they can accept at any given time,” Sonaike said. “That creates a massive backlog of people on waiting lists. And there’s other issues, too. You have issues with transportation to appointments, people not able to time days off of work. Telehealth can play a role there … but you still need a cellphone, tablet or laptop with a camera.”

The New Jersey Association of Mental Health and Addiction Agencies and the behavioral organizations it represents have taken action on these issues, and pushed policymakers to do so, too.

There’s progress still to be made, according to Debra Wentz, the trade organization’s head. But with the attention these issues are receiving — plus more funding from state and federal leaders for programs meant to address them — there’s an increasingly solid foundation, she believes, that a better system can be built on.