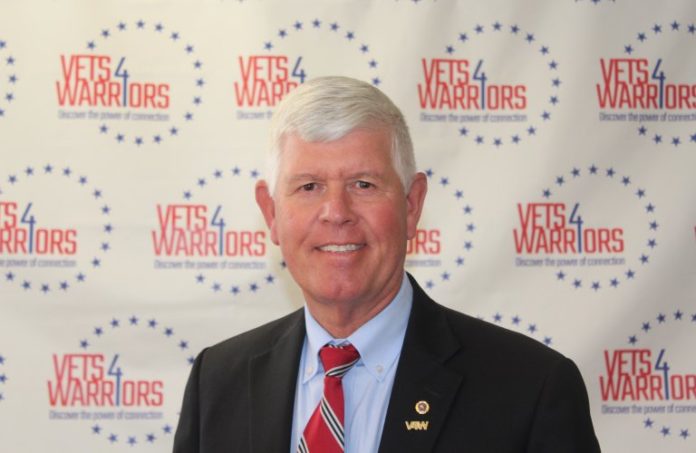 Mark Graham knew his son, Kevin, was sad. You can die from being sad. That, he didn’t know.

Graham’s son committing suicide was a painful realization about the point of crisis those with mental health struggles can find themselves in.

It’s at that point, or at any moment leading up to it, where those answering phones for the Rutgers University Behavioral Health Care National Call Center hope to intervene.

If you need help

If you or someone you know needs help, call the National Suicide Prevention Lifeline by dialing 988.

Graham, a former U.S. Army major general who now acts as executive director of the center, conveyed that the Rutgers operation houses a vital local (and, increasingly, national) network of crisis and support lines. About 350 employees work for the call center in some capacity. It’s a number that’s steadily increasing, as demand also does for these hotline resources.

Often motivated to make a difference by their own life stories, Graham said, it’s a committed bunch of professionals answering those phones.

Graham’s commitment is evident, too. He admits he didn’t know enough about mental health prior to his son progressing from depression struggles, to not taking his medication and, ultimately, to taking his own life. Tragically, his other son, Jeffrey, died from an IED blast while leading an Army foot patrol in Iraq within the next eight months.

“Both were great, young men,” he said, adding that his son Kevin “was fighting a battle of the mind.”

Graham joined the Rutgers call center about a decade ago, after retiring from the Army, to help run the center’s Vets4Warriors peer support line. More than half of the employees answering the tough calls on that “helpline” are former combat veterans themselves.

There are former police officers answering phones on a Cop2Cop line, those who know the stresses of caring for those with dementia and Alzheimer’s on a Care2Caregiver number, retired nurses answering calls from peers and Child Protective Services professionals doing the same.

“We have people — including independently licensed clinicians and mental health specialists — with certifications and accreditations from all walks of life,” Graham said. “They all use a model developed by the person in charge of our peer lines, called reciprocal peer support.”

The Rutgers center takes in calls across 12 separate confidential lines, some of which, like a support line for moms of special needs children, are available on a 24/7 basis. Some of the center’s lines are more nationally focused; some field calls primarily from New Jersey residents.

It’s all an outgrowth of the work clinicians started in 1995 with the Rutgers University Behavioral Health Care‘s Access Center.

“With all we have now, we’ve had people visit the center and, when they’ve left, they’ve said, ‘Who knows about all this and that it’s all right here?’” he said. “Between our support lines, and our involvement with the state suicide crisis line and national mental health crisis lines … there’s a lot going on.”

The center is one of five New Jersey facilities on the receiving end of the National Suicide Prevention Lifeline. And it’s the only one of those regional centers, where professionals de-escalate crisis situations and connect callers with mental health services, operating around the clock.

When someone with a New Jersey phone number calls a hotline like that, Graham explained, it’s a New Jersey call center that it’ll first be routed to, before the call goes to a national backup center.

The Rutgers University Behavioral Health Care National Call Center was recently selected as one of just a dozen national backup centers for the National Suicide Prevention Lifeline, which, as of July 16, will be accessible by just dialing 988.

Graham said the center is busy training the appropriate number of staff they expect they’ll need to handle the overflow calls. The pandemic and other headlines — especially any time there’s a celebrity suicide, Graham said — have already contributed to an uptick in the number of calls their center receives on a daily basis.

“Every time you get a surge of calls after an event, the call volume tends to stay at a higher point than it was before, and never returns to what it was before,” Graham added. “During the pandemic, we’ve seen a lot of that. People have been lonely, isolated and anxious.”

The center, as it has done for many years, will just adjust to the new rhythm of calls.

And its leaders say they’re just honored to have been selected to help those in crisis.

“We know we’re going to get a lot of calls, but that just means people are actually reaching out for help,” Graham said. “That’s key. We have to eliminate the stigma in being willing to reach out for help when they need it, and having people know it just takes dialing three numbers to do that.”

It’s the recognizably close calls that stand out for CentraState Healthcare System‘s Betsy Sunder; the ones where a seasoned professional on an overnight shift answers a caller who is likely under the influence, divulging that they’re considering taking their own life.

CentraState runs one of New Jersey’s crisis call centers that operate from inside health systems. In a situation such as the one Sunder recounted, its own call center links individuals with behavioral health crisis resources and might have the police perform a wellness check.

“We also bring in graduate level interns, who are in master’s programs in counseling or in social work with some field experience already,” she said. “We train them to answer calls, usually with them being provided guidance during the calls.”

Sunder is thrilled with the idea of the 988 line. However, the interaction their call center will have with it is limited, as the CentraState hotline handles the triage of callers themselves.

What this in-house call center is experiencing right now is an increase in elderly callers, Sunder said. These callers are experiencing the widely reported epidemic of loneliness among seniors.

“We’ve gotten some calls (in which) you know they just want to hear another voice and they just want to talk,” Sunder said. “So, we’ll spend time on those calls and try to get them connected to senior citizen (recreation) departments in towns, or at-home counseling.”

Another regular opportunity today — a quandary Sunder finds most personally rewarding to work out for callers — is helping guide people who are reaching out on behalf of another loved one.

“Often, you might have a whole family unit in crisis, with a mother calling because she’s afraid to lose her 27-year-old child to an overdose or suicide,” she said. “We want to help them understand they have no power over their loved ones, they can’t fix them — and that it’s OK to be scared. We try to get them connected to organizations that can help validate how they’re feeling, with others going through the same thing as them.”

Republicans ask Murphy to give milestones, benchmarks for reopenings