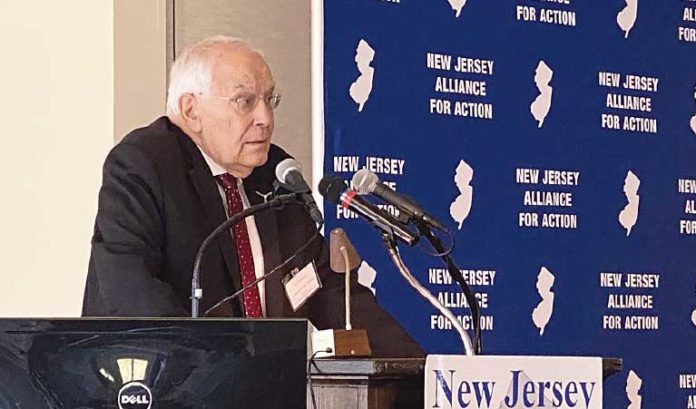 Joe Fiordaliso wants to bring offshore wind energy to the state as much as anyone — and as quickly as possible. But Fiordaliso, the president of the New Jersey Board of Public Utilities, said the state cannot rush the process.

“All of these clean energy initiatives are long-term,” he said. “I know that there are many environmental groups who want us to turn the switch now, but we have to do it prudently.”

Fiordaliso, speaking last Thursday morning in Monroe at an offshore wind energy conference sponsored by the New Jersey Alliance for Action, pointed to that day as a reason for patience. The event, originally scheduled to be outside, was moved indoors after the heat index was predicted to go to about 100 degrees.

“On a day like today, you want air conditioning,” he said. “In January, you want heat. We’ve become spoiled. We just can’t turn the switch; we have to be ready. And we have to take it step by step.”

Fiordaliso said there is good news. New Jersey, he feels, is further ahead in the race for offshore wind than any state in the country.

The next step, he said, is awarding the right to build a transmission system that all offshore wind companies will be able to use.

The idea of having one system — one roadway, so to speak — was unique when it was suggested, but most experts feel it will help the industry grow at a faster rate, and be more reliable, to have one transmission system, as opposed to each company building its own.

The BPU currently is analyzing 80 proposals from 13 companies. Many believe the BPU will make an announcement in the fall, but the date is unclear, as is the number of potential proposals that will be selected.

Fiordaliso said he couldn’t give an update on the selection process, but reiterated the importance of getting it right.

“It’s fine for those turbines to keep turning out — they are 50 miles off the coast — but we have to get that energy on shore, which is a monumental job,” he said. “If I worry about anything as far as offshore wind is concerned, it’s getting that energy on shore and get it plugged in.

“The interconnection is vital. Otherwise, all the money and all the effort we’re putting into creating these clean energy initiatives is for naught.”

Fiordaliso said the growth of the industry has come with a sharp learning curve.

He joked that, when the offshore wind initiative started, he thought you just had to put turbines out in the ocean. He has learned just how complicated the multistep process is. And Fiordaliso freely admits the state is going to make mistakes along the way.

“We’ve never done this before,” he said. “Are we going to make mistakes? Yes. But that doesn’t mean we stop. That means we learn from those mistakes and move forward. That means we partner with our European friends, who have been doing this for 25 years.

“We’re not ashamed to admit that we don’t know it all.”

Here’s what he told the crowd he does know: There’s no turning back — despite some limited opposition groups.

“There’s nobody who’s going to stop us,” he said.

And that’s a good thing for the state, he said. Offshore wind not only brings clean energy, it also will bring thousands of jobs, starting in Paulsboro, where a Wind Port will employ thousands manufacturing parts that are needed for turbines and other aspects of the process.

Fiordaliso credited Gov. Phil Murphy for have the vision.

“Offshore wind is one of the cornerstones of Gov. Murphy’s clean energy agenda,” he said. “I would say, without hesitation, that we have the cleanest, greenest governor in the United States, one that promotes initiatives that are going to make our lives better.”

It’s just not going to do it overnight, he said.

Fiordaliso encouraged the approximately 200 people in attendance to find their place — investigate where you fit in, he said.

Be patient, he said, but be confident that the industry is going to continue to grow.

And realize New Jersey is in the lead in the initiative, he said.

“We are fortunate to live in a state like New Jersey, because there is no other state that’s as far along as we are,” he said.