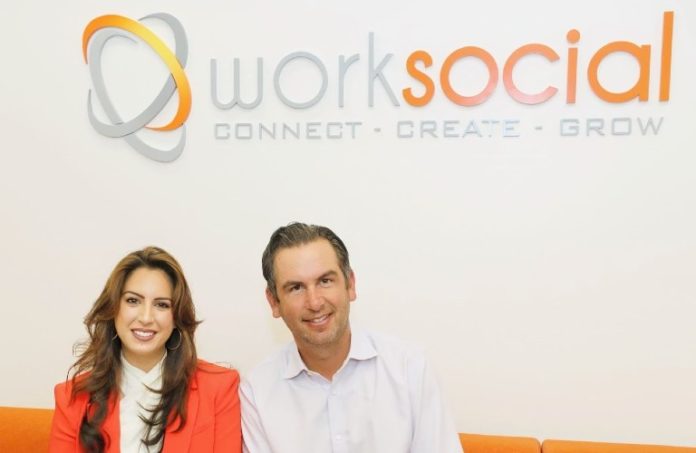 WorkSocial, a female and minority-owned coworking space with locations in New Jersey and New York, welcomed Jersey City Mayor Steven Fulop last week to its headquarters at 111 Town Square Place, 12th Floor for a tour of its new expansion space.

Fulop met with Natasha Mohan, CEO and founder, and the rest of the WorkSocial team to tour the expanded coworking space and get a firsthand look at WorkSocial’s premium amenities, including virtual reception service, secure server access, shipping and mailing, onsite notary and high-speed Wifi, printing, hot breakfast, lunch, beverages and snacks.

Mohan is a longtime Jersey City resident and the community holds a special place in her heart as well as her business. She founded WorkSocial in August 2015 and opened the doors to its Jersey City headquarters on February 8, 2016.

Mohan has made supporting local businesses and giving back to the community an integral part of WorkSocial. The coworking space sources its lunch and snack offerings from local Jersey City restaurants and vendors. In addition, the company regularly donates food and needed supplies to the York Street Project at St. Joseph’s Home, a local organization that offers innovative programs that shelter, feed, educate and promote the healing and independence of persons in need, especially women, children, and their families.

“It was an honor to host Mayor Fulop at WorkSocial’s Jersey City headquarters,” Mohan stated. “Jersey City has been an important part of our business’s story–we started our business right here in 2015–and we are now celebrating the expansion of our headquarters and looking forward to increasing our real estate portfolio in New York City as well as growing our virtual office service Flexy worldwide.”