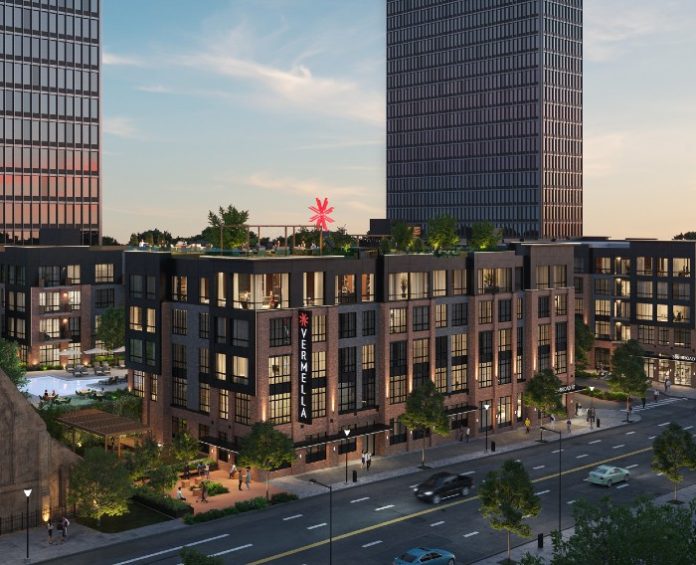 Russo Development broke broken ground on Vermella Broad Street in Newark, according to a Wednesday announcement from the Carlstadt-based developer.

Located at 355-365 Broad Street, the 297-unit apartment and retail community is situated adjacent to Newark’s Broad Street train station. The long-dormant site at will feature studio, one- and two-bedroom apartments, 40,000 square feet of indoor and outdoor amenities spaces, and 4,200 square feet of retail space.

Under the City’s Inclusionary Zoning Ordinance, it will include 30 affordable housing units, and Russo is also making a $450,000 payment to the Newark Affordable Housing Trust Fund. Development of this site was made possible by a 30-year tax abatement from the City of Newark.

The property will also celebrate Newark’s contemporary arts movement with installations by local artists in a new public exhibit space accessible from the streetscape.

“Newark’s business districts continue to attract large world-class corporations with employee bases that are looking for nearby quality housing,” Baraka stated. “Vermella Broad Street introduces a new housing option for these residents, with distinctive styling that features contributions from our own arts community, immediately connecting it to the City’s cultural life. We are anticipating the building’s completion and its residents’ participation in the life of the city.”

“We are excited to be part of a transformative project which supports the City’s vision for economic development and affordable housing in the Lower Broadway community,” Edward Russo, CEO of Russo Development stated. “Newark’s downtown has experienced incredible growth over the past five years, and we look forward to delivering a new and diverse housing option by the fall of next year.”

Vermella Broad Street is less than 500 feet from the Broad Street Station, and a short drive to Interstate 280, the New Jersey Turnpike and the Garden State Parkway. It is also walking distance to Newark’s downtown commercial business district and the Newark campuses for NJIT and Rutgers.