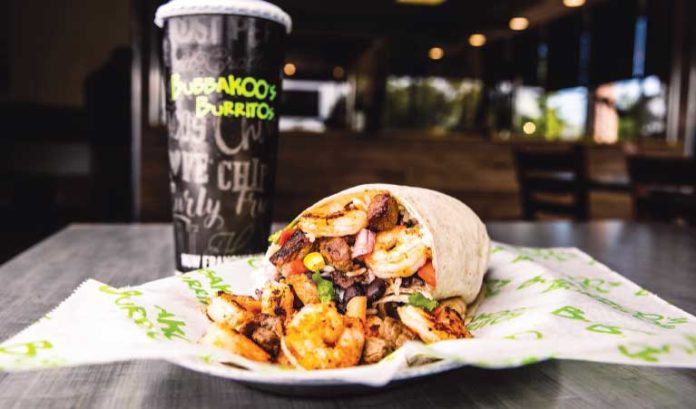 Chris Ives, the chief financial officer for Bubbakoo’s Burritos, the Jersey company that is one of the fastest-growing fast-casual restaurants in the country, can easily rattle off numbers detailing the growth of the Wall Township-based chain.

Bubbakoo’s will have 90 stores by the end of August (with openings in Somerset and Jersey City), should have 100 by the end of the year (if all in development go as planned) and likely will add approximately 25 in each of the next two years.

“We’re trying to become a category leader within the Mexican food space,” he said. “That’s the long-term goal. Within the next 12 to 24 months, the goal is to be at 150 units.”

While Bubbakoo’s is branching out geographically, concentrating mostly on the tri-state area, Florida and Ohio, it certainly remains Jersey-focused. The Somerset store will be its 50th in the state, and Ives said the next two years could bring a dozen more.

But Ives, who joined the company four years ago — when it only had 17 stores — said the company is just as concerned with its digital growth.

Bubbakoo’s, he said, was fortunate in that the smaller footprint of its stores (1,500-1,800 square feet) allowed it to easily transition to the takeout and delivery model that has excelled since the pandemic arrived in 2020.

Bubbakoo’s, Ives said, is concentrating on ensuring that it benefits fully from the business model — rather than having third-party services (such as DoorDash or GrubHub) take a percentage of its business.

Here’s how the company is taking on the challenge:

“We’re really focusing on building out our back-of-the-house efficiency,” Ives said. “We’re about 50% digital, 50% in-house on average throughout the country.

“We definitely feel we’ll continue to see digital growing, just like every other brand. So, now, we’re really focused on how we can better engage with our customers and make it easier for the throughput to get out of the restaurant into their hands.”

Clearly, the chain is doing something right.

Bubbakoo’s was co-founded in 2008 with a store in Point Pleasant by Jersey guys Paul Altero and Bill Hart. And it certainly has a Shore and skateboarding-style feel. It also has a fabulous growth rate. Bubbakoo’s, still privately owned with no connection to private equity, was No. 1,176 on the Inc. 5,000 list released earlier this month. It had a 552% three-year growth rate.

Ives, a Jersey guy himself (born and raised in Freehold; Seton Hall University grad) spoke with ROI-NJ about the restaurant. Here are his thoughts, slightly edited for space and clarity.

ROI-NJ: Let’s start with the food and the competition in what is a crowded space, fast-casual Mexican food. Who are your competitors?

Chris Ives: We’re fast-casual quick-serve. Our competition is the build-your-own concepts, Chipotle, Moe’s, Qdoba — and you’ve certainly got some smaller, mom-and-pop regionals throughout the country.

I think the difference in food quality and flavor profile, compared to all of our other competition, sets us apart. Our food pillars are a game changer for us. (The chain offers items its competitors may not, including General Tso’s chicken, tacos, hibachi steak and shrimp and buffalo wings). The American fusion that we offer typically bodes well for us on the on the recipe flavor profile side of things.

ROI: Let’s talk about franchise growth. The company has locations — or plans for locations — in 18 states, including the West Coast (California, Arizona, even Idaho). But the overall concentration is narrower. Where are you most looking to grow — outside of New Jersey?

CI: The West Coast is more one-off partners that are building out the market. That’s a separate task, whereas our prime focus for growth over the next two years is definitely continuing to build out the tri-state, where we have a good household name, the Southeast, and then the Midwest, especially Chicago and Ohio.

ROI: You have five stores in Ohio, with two more coming soon. We get the tri-state. We get Florida. Why Ohio?

CI: Ohio is a market where people definitely like Jersey foods. It’s not so much the demographic — there’s obviously no beach or anything like that there, so it doesn’t really fit our scene — but the overall food quality that we deliver, and the fact that people that like to eat out there, just makes sense for us to be in that market.

We’ve had a lot of success in Cincinnati. And we’re continuing to open up a few more throughout the end of the year in Cleveland and Columbus.

ROI: Let’s turn to the digital side and the potential growth there. Tell us more?

CI: Growthwise, it’s another platform for us to get our customers within our own funnel here to become a Bubbakoo’s customer. We’re constantly trying to win those customers over in markets where we have the opportunity — where we’re doing 35% on third party, but only 20% on our own native data, digital platforms.

That’s the big market share out there; how can you win that growth on our side? The goal is to continue to entice our customers to only transact on the public use app or website.

ROI: You even are hiring your own drivers. It seems everyone has been struggling to find staff. Has it been difficult to find workers during your expansion?

CI: It’s been tough, but we’re definitely seeing more employees coming in the door. I think reality has set in for a lot of folks. Inflation, obviously, is impacting everyone’s own disposable income. So, people are definitely back working in the restaurants.

When we go to open up a new store in a new market, we’re definitely seeing a higher influx of applications coming in the door. We’re still offering sign-on bonuses, all that stuff, but — for the most part — we’re starting to see a rebound, where it’s not as much of a struggle. We’re not sitting on a store that can’t open because we don’t have the employees.

ROI: Last question: Bubbakoo’s? Where does that name come from?

CI: That’s always the million-dollar question. It was really just a mash-up from Paul and Bill’s nicknames from college. But it’s really stuck. That and the bright green lettering with the big double O’s.

It’s always an intriguing name for customers and gives them a reason to come in and give it a try.