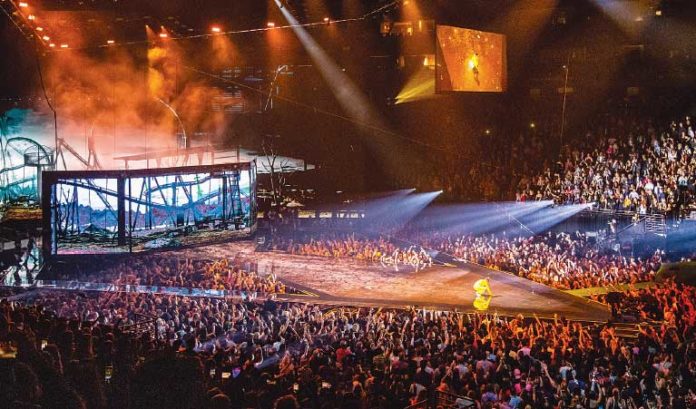 Prudential Center officials are well aware that hosting the MTV Video Music Awards show Sunday night is another opportunity to showcase their arena before the thousands of music industry and entertainment leaders that will attend in person or see it on television.

It’s another opportunity to show why the arena consistently rates among the Top 10 in revenue both domestically and internationally.

It’s another opportunity to show that Newark and New Jersey stand on their own as a media center.

They also know this: The fact that the VMAs, one of the most coveted shows in the industry, are coming back to Newark and the Prudential Center for the second time since 2019 means the arena is well past the proof-of-concept stage. It has arrived.

Dylan Wanagiel, the vice president of sports properties and special events at Harris Blitzer Sports & Entertainment, put it this way.

“The reality is, you don’t get an event of this magnitude back unless everyone involved had a great experience the first time around,” he said.

“We’re thrilled that everyone at MTV had a great experience here in 2019. And we plan on delivering another great experience for them here this Sunday, which will certainly lead to future business.”

Wanagiel was not with the owner of the arena in 2019, but he certainly has seen that show’s impact. 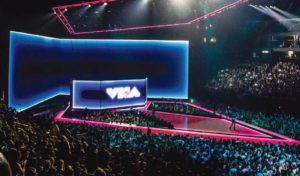 “I think hosting this event in 2019 really helped us become the North American home of K-pop,” he said. “And we’ve continued to do tremendous business in the Latin and R&B worlds. Marquee events like this really help drive your other businesses.”

In the ever-competitive world of arena booking — especially in the Northeast, where there are three other top-line arenas within 25 miles of the Prudential Center — an event like the VMAs is the ultimate networking opportunity.

Not only will it bring thousands of agents, managers and promoters from the music industry, it will bring those from other arena entertainment productions, too. Family shows, combat sports, comedians, you name it — those promoters will be here, too.

“When you say, ‘We’re hosting the VMAs,’ everyone perks up and says, ‘I’m coming — and we’d love to talk about bringing one of our events there.’ That’s a huge benefit of booking a marquee event.”

The benefit extends outside of the arena, too.

The VMAs provide another chance for Newark to show off itself. On the music side, New Jersey Symphony Hall officials said they got plenty of inquiries regarding rehearsal space — which CEO Taneshia Nash Laird said provided her an opportunity to explain the renovations she is overseeing. The New Jersey Performing Arts Center certainly gets attention, too.

And, while the city’s restaurants get a boost — try getting a seat in the Ironbound on Sunday afternoon — one of the city’s new showcase parks will be featured, too, as the red-carpet walkup will go through Mulberry Commons.

Newark Mayor Ras Baraka obviously is thrilled to have the event back.

“Their decision to return here is recognition of our past and present as a center of music and the arts, our diverse peoples and our hospitality,” he said.

“This weekend of world-class musicians, singers and entertainers performing and receiving well-deserved awards will bring visitors to Newark, positive attention to our city and additional strength to our economy.”

Capturing the moment — as the arena and city did in 2019 — clearly is the key.

It also creates a great-problem-to-have scenario: With so many key people in the arena, how do Pru Center officials spend time with each of them?

Wanagiel said he and his team have a plan.

“It’s like a wedding,” he said with a laugh. “You have a lot of guests, and you really want to spend quality time with all of them. You have to be strategic and quick with your conversations, because there are so many people to A) thank for bringing the event to your venue, or B) touch base with for potential future business.

“So, yes, it is a challenge in that regard, but a welcome challenge. This is an opportunity to showcase not only our world-class venue, but the world-class city of Newark to so many people. We can’t wait.”