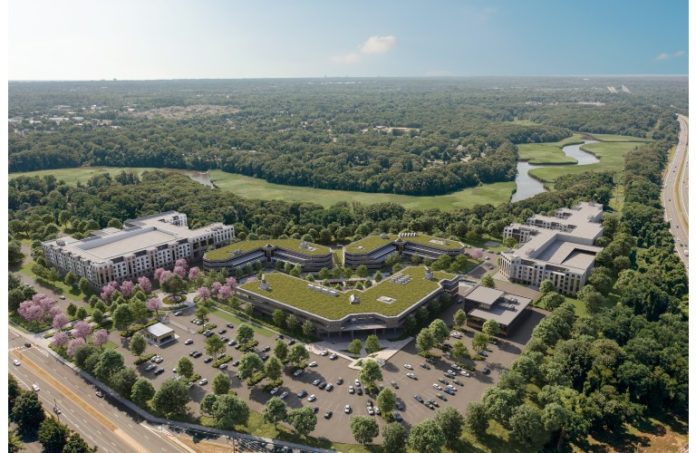 Newmark on Wednesday announced it was retained as the exclusive office leasing agent for River Centre in Red Bank — a six-building, 668,107-square-foot Class A office campus owned by Crown Realty and Paramount Realty that is undergoing a major series of renovations.

“River Centre is one of the largest office assets in the region, and we are deploying a significant amount of capital to revamp the property to create a campus-like setting that is more akin to a modern and amenitized tech campus in Silicon Valley,” said Maurice Zekaria, president of Paramount Realty. “We look forward to further cementing this campus as an integral part of the community.”

Additionally, Paramount and Crown have committed over $25 million for a capital improvements plan that will include a significant overhaul to the complex’s North and South areas.

Ownership has enlisted landscaping architects LRK and Ground Level to revamp the property’s exteriors and include a river walk that allows tenants to experience the adjacent Navesink River.

“Over the past few years, we’ve witnessed a major flight to quality for office users looking to locate in modern, creative and amenitized spaces,” Drummond stated. “The commencement of the major overhaul of River Centre will further the center’s ability to attract and retain some of the best firms in the region.”

The tenants at River Centre feature a mix of financial services, insurance and law firms. Its most notable tenants include UBS, Withum, Wells Fargo, Innocor FXI and Achieve 3000.