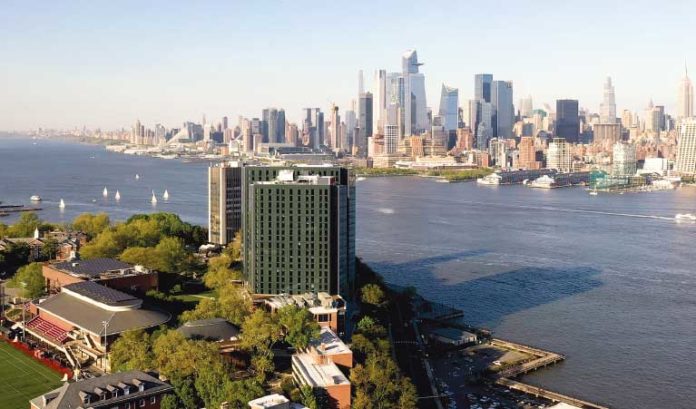 Here’s a look at some of the cool projects that have been popping up on college campuses across the state:

In March, Kean opened a 3,000-square-foot esports arena on the second floor of the Green Lane Academic Building.

The space features a large screen for competitions, space for up to 50 spectators, state-of-the-art computers built for gaming, and gaming consoles including the Nintendo Switch, Sony PlayStation 5 and Xbox.

The students who produce the live broadcasts of Monmouth University’s Division I sporting events are now doing so from a new, state-of-the-art control room, thanks to a generous gift from Charles and Trudy Parton.

The rise of Maple Hall, a 176-unit apartment-style residence on Warren Street at NJIT, coincides with a growing demand for housing at a university that has experienced 24% enrollment growth since 2011.

The eight-story building is designed to have wide student appeal, with single and double units and amenities like full kitchens, a convenience store, grass courtyard and collaborative spaces. The modern hall will help NJIT broaden its geographical appeal.

These new complexes advance one of Princeton’s highest strategic priorities: an expansion of the student body by 500 students so additional high-achieving students will realize the benefits of a Princeton education, enhance the diversity and vitality of the campus community and contribute to society after they graduate.

Rowan University is in the midst of a multiyear, multimillion-dollar infrastructure project to mitigate flooding while beautifying its 200-acre main campus.

Focused on Meditation Walk, the east-west corridor crossing the north side of campus, the project was designed to beautify the campus while easing stormwater runoff, improving absorption and eliminating or reducing surface flooding. The project improved the health of Chestnut Branch Stream.

The space features retractable bleachers with an allotment of chairback seating, full replacement of the hardwood court, updated branding and signage, a reimagined entryway, enhanced lighting and new video scoreboards.

It is named the Run Baby Run Arena as tribute to the legendary team that earned the moniker after routing Duke in the 1968 NIT quarterfinals in front of a record crowd at Madison Square Garden. Some say it helped spur the team on its Cinderella run to the Elite Eight of the NCAA Tournament last March.

Stevens officials call them the UCC — many just call them “the towers.” By any name, they are the most transformative construction project in the school’s history.

The University Center Complex, which opened in spring 2022, is an iconic structure that features dual 19- and 21-story residential towers that house approximately 1,000 students and are connected by a skybridge high above the Hudson River.

They are visible from New York City — with an east-facing façade that includes Stevens’ signage to accentuate the university’s growing profile in the metro New York academic and technology landscape.

At the base is a three-story University Center that serves as a true campus hub, fully equipped fitness facilities, private dining and café spaces, multiple lounges, high-tech conference rooms and auditorium spaces that can accommodate large community events.

An exterior terrace overlooks the Hudson River and the New York City skyline, providing a stunning venue for formal and informal gatherings.

The school marked a milestone in the construction of the second phase of its Atlantic City campus this summer, a topping-off ceremony for the six-story, 135,000-square-foot, 416-bed residence hall that is under construction at Atlantic and South Providence avenues in the University District, across from O’Donnell Park.

The $69.3 million expansion, being built by Atlantic City Development Corp., is expected to open in the fall of 2023.