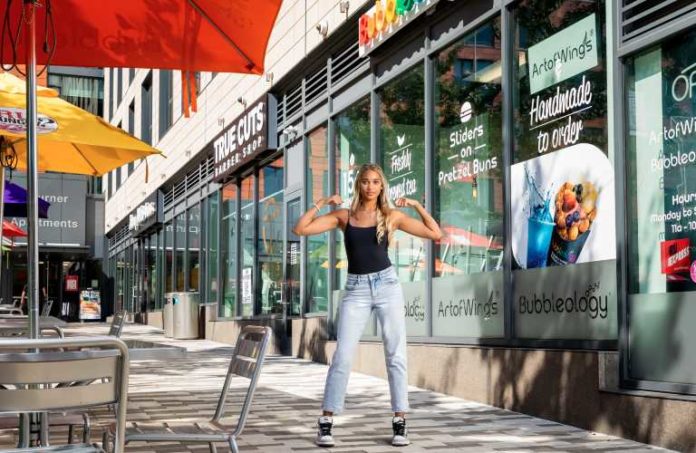 In an example of the past, present and future of college athletics all colliding, the New Brunswick Development Corp., better known as Devco, and the Knights of the Raritan announced Thursday a partnership to celebrate the 50th anniversary of Title IX on the New Brunswick campus of Rutgers University by signing eight female Rutgers athletes to name, image, likeness deals.

Devco and Knights of the Raritan, along with KTR’s collaborator, Student Athlete NIL, did a video shoot with eight current Scarlet Knights female student-athletes at the Yard @ College Ave. The athletes shared their experiences on campus, their paths to Rutgers, their thoughts on Title IX’s impact and their favorite social spots in New Brunswick.

Devco has been a catalyst for the city’s revitalization and the ever-changing Rutgers campus. It also was one of the first companies to sign a Rutgers athlete to an NIL deal, doing a promotional agreement with the football-playing Melton brothers last fall.

Devco President Chris Paladino said the organization jumped at the chance to do a Title IX-based NIL project this year.

(Title IX is a federal civil rights law that is a part of the Education Amendments of 1972. It prohibits sex-based discrimination within educational programs that receive federal funding. Its enactment in June 1972 led to decades of advancement in women’s collegiate athletics and elevated women’s rights in general.)

“The histories of Title IX and the women of Rutgers University Athletics are inextricably linked, with Rutgers having first admitted women to the undergraduate and intercollegiate athletic programs in 1972, the same year in which Title IX was enacted,” Paladino said.

The eight Rutgers student-athletes involved in the multimedia project who were compensated through NIL deals with Knights of the Raritan:

“In the years since, the women of Rutgers University Athletics have been a national force both athletically and in the classroom. Devco is proud to highlight the incredible women currently participating in Rutgers Athletics, as well as the contributions of the generations of women who paved the way at Rutgers since 1972.”

Jon Newman, President of Knights of the Raritan — an NIL collective founded with the aim of “empowering Rutgers student-athletes” — was eager to be a part of the project, too.

“This is a unique NIL partnership and it’s no surprise that Devco is at the corporate forefront of celebrating the Rutgers roots of a progressive cause like the 50th anniversary of Title IX,” Newman said.

“Many of RU’s most memorable athletics moments over the last 50 years came from women’s programs — like the 1982 AIAW women’s basketball national title, the 2007 women’s basketball national title game, and women’s soccer’s College Cup appearances in 2015 and 2021. KTR looks forward to doing many more deals with female athletes at Rutgers, with Devco and with other local and national organizations.”

Content associated with the project will be released in conjunction with the start of the 2022-2023 academic year at Rutgers.