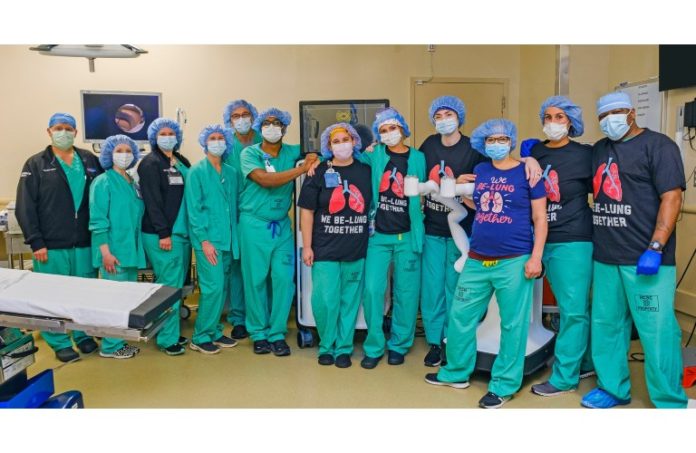 AtlantiCare’s Heart and Vascular Institute and Cancer Care Institute teams announced they  performed their 100th robotic bronchoscopy on Aug. 24. Team members wore shirts touting “We be-lung together” under their scrubs, signifying their commitment to teamwork in diagnosing and treating lung cancer and other lung illnesses early.

Egg Harbor Township-based AtlantiCare was the first hospital in New Jersey to use this technology to diagnose lung cancer and other lung issues at the earliest stages — when treatment is most effective.

“Using this minimally-invasive technology has helped us seek, find and remove tiny lung nodules that in the past would have been too small to detect and/or hard to remove,” Dr. Amit Borah, interventional pulmonologist, AltantiCare’s Lung Nodule Clinic and Heart and Vascular Institute, stated.

According to the American Cancer Society, lung cancer is the second most common cancer in both men and women in the U.S.

“Symptoms can mimic other illnesses,” Borah said. “People often learn they have lung cancer after an X-ray or other scan for another health issue shows a nodule on their lung. Even those who have no known risk factors can develop lung cancer. It is vitally important that individuals tell their primary or specialty care provider if they have symptoms.”

“Symptoms can include a general feeling of not being well or of extreme fatigue. A new cough that doesn’t go away, shortness of breath, hoarseness, chest pain, headache and bone pain are also possible signs of lung cancer.”

Borah added that unintended weight loss and coughing up blood are symptoms.

Ciattarelli, Wisniewski on whether they’ll run for governor (again) in 2021...

Quest Diagnostics unveils giant testing lab at ON3 in Clifton