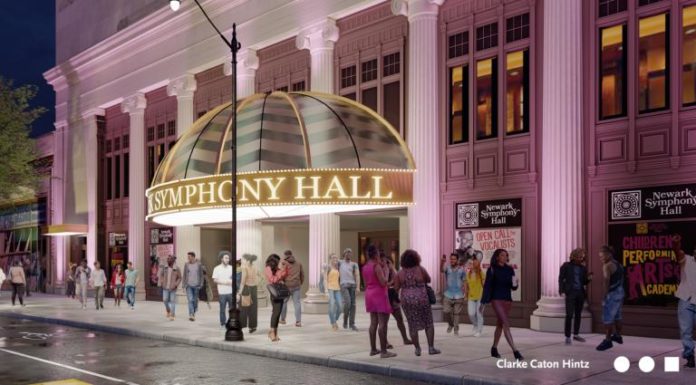 Newark Symphony Hall, once a jewel of the city, continues to take steps back in that direction.

The facility, which opened in 1925, recently received two major donations from Prudential Financial and the Mellon Foundation that will help in its drive to complete its 100th anniversary capital improvement campaign.

The capital improvement campaign is positioned to create 500 construction jobs and contracting opportunities for 50 small businesses in the community. It is expected to utilize federal historic tax credits, among other economic development funding tools for catalytic projects.

The venue, located at 1020 Broad St. in Newark, is in a designated Opportunity Zone.

The $750,000 gift from Mellon, the nation’s leading funders of the arts, enables the establishment of a new programming department for NSH.

Mellon’s grant will support three years of staffing for a director, manager and coordinator. This will be the first time in nearly two decades that the multifunctional facility — a complex encompassing multiple performance and rehearsal spaces, including a dance studio — will have dedicated programming staff. Accordingly, the department’s responsibilities will include assessing the community’s programming needs, developing internal infrastructure and scaling the programming’s scope and reach.

NSH CEO Taneshia Nash Laird said a major focus of the new department will be to “center the cultures of communities of color, those traditionally marginalized, but who constitute majorities in the city and state and around the globe — including from the African, Latinx and Asian diasporas.”

Emil Kang, program director for arts and culture at the Mellon Foundation, said NSH fits the mission of the foundation.

“NSH gives voice to artists who have long contributed to our understanding of community,” he said. “We are honored to support Taneshia Nash Laird’s leadership and NSH’s commitment to honoring the rich legacy and creativity of Newark.”

Nash Laird said the donations come at an opportune time.

“After piloting a number of programs in the past two years, including the artist-activated #EmbraceNewark pandemic relief initiative with poet Jasmine Mans as creative director, launching the state’s New Jersey Youth Poet Laureate program and creating the Lab performing arts incubator and career accelerator, the dedicated programming department will facilitate our program production in all of our venues — including the Sarah Vaughan concert hall, our legendary Terrace Ballroom and our black box theater,” she said.

The funding arrives as the venue has had a series of operational successes, including becoming an in-demand alternative location for film and television productions. In 2021, USA Network’s series “America’s Big Deal” was broadcast live from NSH for the entire season. Additionally, the Hulu drama series “Wu-Tang: An American Saga” transformed spaces in the 145,000-square-foot complexes for two episodes of the show during the pandemic, including one directed by Hollywood filmmaker Mario Van Peebles.

NSH has raised $15 million so far and expects another $16 million in state and federal historic tax credits. Additionally, for the first time in decades, NSH received state funding: $5 million in New Jersey’s 2022 budget and $6 million in the state’s 2023 budget.