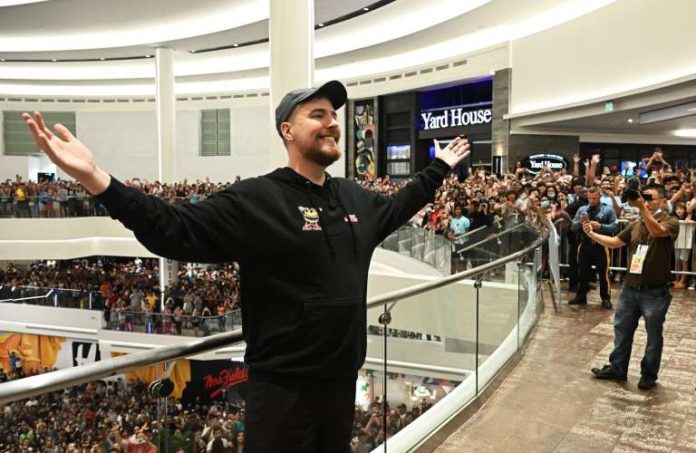 American Dream, still working to increase its brand recognition with consumers in New Jersey and around the region, used one surefire approach to bring thousands to the retail and entertainment center at the Meadowlands this weekend.

On Sunday, American Dream opened the first physical location of MrBeast Burger, the hugely popular virtual restaurant started by MrBeast (real name: Jimmy Donaldson), who is one of the most watched YouTube personalities, with more than 100 million subscribers and more than 17 billion views.

American Dream officials said more than 2,000 people were there at the opening (many came the night before and waited in line) and more than 10,000 people showed up during the day, although media coverage (traditional and social) indicated it could have been more than that.

The restaurant, which opened at 11 a.m., stayed open until nearly midnight to ensure that everyone who came got a burger.

It’s unclear if folks showed up for the food or for the potential philanthropic efforts of Donaldson, who has taken extreme philanthropy (he often just gives away money), outrageous stunts and ultralavish prizes to an unprecedented level.

But the brand recognition for American Dream — and MrBeast Burger — couldn’t have been greater.

We open our first Beast Burger in 10 minutes and there is 10,000+ people already in line 😯

I feel pretty good about serving all you but anyone else coming idk maybe come tomorrow/later tonight haha pic.twitter.com/TncCGHgqqp

Donaldson posted three videos on Twitter, which had nearly 500,000 likes by midday Monday. Global outlets, including the New York Times and BBC, covered the opening.

Sunday was the type of moment that American Dream CEO Don Ghermezian has envisioned from the start.

“American Dream is a world-class destination with one-of-a-kind experiences and first-to-market concepts, designed to delight a multigenerational audience,” he said.

Where it goes from here, remains to be seen.

The location is Donaldson’s first physical incarnation, as a delivery-only restaurant brand, MrBeast Burger, launched in partnership with Virtual Dining Concepts, instantly became the most downloaded app on iTunes and Google Play, landed in the Top 5 most popular Google searches worldwide, and spawned the No. 1 trending video on YouTube.

Of course, part of that is because of his philanthropic efforts.

Donaldson makes a point to give back. His efforts include regrowing forests (reports say he’s helped plant 20 million trees worldwide) and cleaning up the oceans and rivers (reports say he has helped remove 30 million pounds of plastic and trash).