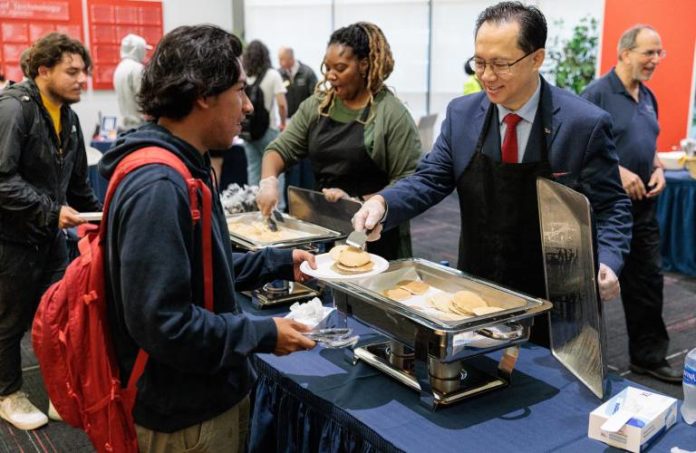 New Jersey Institute of Technology is proud of the fact that the enrollment this week for the Class of 2026 is the highest ever in school history — at more than 1,600 students.

It’s happier that the class, combined with all the current undergrads and graduate students, pushes the school’s overall enrollment to 12,000 — also a record.

But it is happier still that these jumps are not a one-time moment. The fact is, NJIT’s overall enrollment has been growing steadily the past decade.

So, what’s causing the steady surge? A steady emphasis on expanding the campus and expanding opportunities to more students from underserved communities and more women.

Underscoring NJIT’s mission of providing a science, technology, engineering and mathematics education to those typically underserved, the school said the number of first-year students who identify as Black or Hispanic has more than doubled since 2012. This year, students identifying as Black or Hispanic make up 10% and 30% of the freshman class, respectively, compared with 7.1% and 20% in 2012.

The largest-ever first-year class also has the highest proportion of women, at 31%, with 503 of the 1,601 enrollees being female.

NJIT officials point out that the push for diversity has not lowered the academic excellence of the enrollees. In fact, NJIT not only received a record number of applications, at 13,000, for the Class of 2026, the incoming first-year class’s average SAT score rose to 1,302, up from last year’s average of 1,295. Average GPA is also up, at 3.75.

NJIT reached 12,000 students for the first time. A breakdown:

“The growth in application numbers and enrollment at NJIT are the result of students recognizing that NJIT is a tremendous value and a launching pad for future success,” he said. “They also are due to our planned efforts to grow the pipeline of students from underrepresented groups pursuing STEM education, specifically at NJIT.”

To support NJIT’s enrollment growth, the university has seen extensive physical changes. Since 2014, NJIT has undergone a $500 million campus transformation that saw major additions, such as the Wellness and Events Center, Life Sciences and Engineering Building and Makerspace, and complete renovations to many lecture, laboratory and classroom spaces.

The enrollment growth coincides with improved standing in many prominent national rankings. Most recently, NJIT jumped 114 places to No. 75 on Forbes’ 2022 list of America’s Top Colleges. Among public universities, NJIT ranked No. 1 in New Jersey and No. 28 nationally — up from No. 89 last year — and, across all New Jersey universities, NJIT was second only to Princeton.

The number of graduate students also increased this fall. NJIT is projected to have 3,196 students pursuing a master’s or doctoral degree — 570 more than last year.

Four NJIT students named Goldwater Scholars — one of the top...

Allen-McMillan will bring plenty of public school experience to role as...