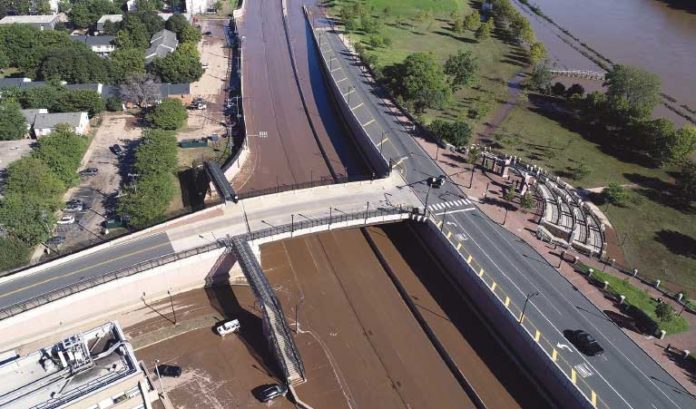 From the flooding that has devastated parts of Kentucky and Missouri because of record rainfall to the water shortage amid record-setting temperatures in the Southwest, the dramatic impact of climate change has been on display in the U.S. all summer.

You don’t need to be one of the leading environmental lawyers in the state to see that.

But, when you’re Dennis Toft, a partner at Chiesa Shahinian & Giantomasi who has decades of experience in all aspects of environmental law, it’s all very clear.

Toft said global issues, such as the catastrophic flooding in Pakistan and the latest fears on glacier melting, should be enough to raise an alarm. Of course, the impact of the remnants of Hurricane Ida last summer should have done that already in New Jersey.

The problem: There’s no easy fix.

Toft applauds Gov. Phil Murphy’s administration and the state’s Department of Environmental Protection for their efforts and concerns, including the initiative NJ PACT, which stands for Protecting Against Climate Threat.

“They want to do the right thing,” he said.

The standards of the initiative, which takes aim at the quality of the air and the way we build on land, are still being worked out.

It’s challenging. Especially when it comes to building.

The state is attempting to assess how the impact of sea-level rise and increased rainfall should affect building standards — potentially including more no-build zones on the coasts and greater regulations inland. But, when 100-year storms become a regular occurrence, the data for those assessments is difficult.

“It’s based upon historical information,” Toft said. “And I think there is a recognition that, given what we’re seeing, the predictions are that there’s going to be a lot more rainfall in the future than there has been in the past in New Jersey.”

While determining the data is difficult, implementing regulations that result from it is just as hard. An effort earlier this year to implement emergency building rules ran into plenty of opposition.

The business community, Toft said, argued that emergency regulations would have a dramatic impact on projects already underway and in the pipeline.

As of now, the state is working on a broader proposal.

“We all see things are happening and I think the DEP and the state of New Jersey is trying to get out ahead of it by making sure people can build safely in the future — that’s what this is about,” Toft said.

“Now, the details are what’s going to be debated once it gets proposed. And, whether it’s 2 feet or 1 foot — and whether you have additional grandfathering provisions — is all going to be part of the discussion once the proposal comes out.

“And there will be other big challenges to implementing it.”

When it comes to storm preparedness, the state’s existing infrastructure obviously was built at an elevation that reflected the standards at the time.

“So, if you’re doing new building, and you’re trying to connect into existing infrastructure — roads that are lower, even utilities that are lower — how do you deal with that?” Toft asks.

And who is going to oversee — let alone enforce — any new provisions?

“There’s a lack of resources at DEP to be able to manage the onslaught of activity that they are getting and continue to get because of the significant number of retirements that happened during the pandemic,” Toft said. “Their inability to backfill those positions, and the loss of institutional knowledge that came with it, has been devastating.

“You’re dealing with all these complex rules and these complex systems. At the same time, the people who might have had the experience and the knowledge to deal with them, have appropriately taken their retirements or moved on to other things, just like the rest of the world has, as a result of whatever was expedited by the COVID pandemic.”

Staffing issues show up everywhere — and, to be fair, have been an issue for years.

You want the good news? New Jersey already is ahead of many other states when it comes to handling the impact of climate change.

Toft sees the massive flooding elsewhere and wonders if the situation was made worse by a total lack of infrastructure to handle it.

“When you look at other places, you see that they didn’t really have infrastructure to handle it because they never had to deal with it before,” he said.

New Jersey needs to determine if what has happened elsewhere could happen here.

“People need to take a step back and say, ‘Is this the result of overdevelopment, is it the result of things that we didn’t really think about and that we need to think about now — and how do we protect people?’ Because this is going to happen again,” Toft said.

To do so, New Jersey needs to make sure it leverages the advantages it already has.

It’s one thing to have storm drainage systems in place, it’s another to make sure they are operating properly, starting with whether they are continually clear of debris that could prevent them for working properly.

Is that the role of the DEP or local municipalities — or any other entity, such as the Department of Transportation?

Did we mention that this is not an easy fix?

Throwing money at a problem isn’t always the answer.

But, if the state wanted to do so, it appears to have the resources. Between the federal infrastructure bill and the unexpected revenue surge of 2021, there are funds.

Toft votes for using some of them to help the DEP.

“I really do think one of the issues that affects everybody is making sure that the DEP has the resources it needs to do its job,” he said.

“I know people will hear that and say, ‘Oh, you want more government? Well, yeah, I do. When I submit a permit application, I want to make sure there are enough people there to actually look at it and review it and to process it. And, right now, that’s not the case.

3 things to do today

We asked Dennis Toft, the highly respected environmental lawyer at Chiesa Shahinian & Giantomasi, for three things he would do to help the state deal with climate change as it pertains to the building community. Here’s what he said:

We need to — particularly post-Ida — look to see where the infrastructure failures were and figure out a way how to fix them so that what’s already in place works better — and is set up to handle what happens in the future.

We need to look at what the resource needs are of the Department of Environmental Protection and find a way to make sure those needs are met. I know they’re looking to hire, but they have the same problems hiring that everybody else does. It’s an ongoing problem that needs to be addressed.

We need to realize that one size doesn’t always fit all when it comes to rules
and regulations, including hardship exemptions for flood hazard rules. I would
look at the other coastal rules and see if a similar hardship exemption provision should be added — recognizing that, when you apply for a hardship exemption, you really need to demonstrate that what you’re doing still is protective of human health and the environment.

Indoor dining fight goes on: Business leaders say 25% is a...