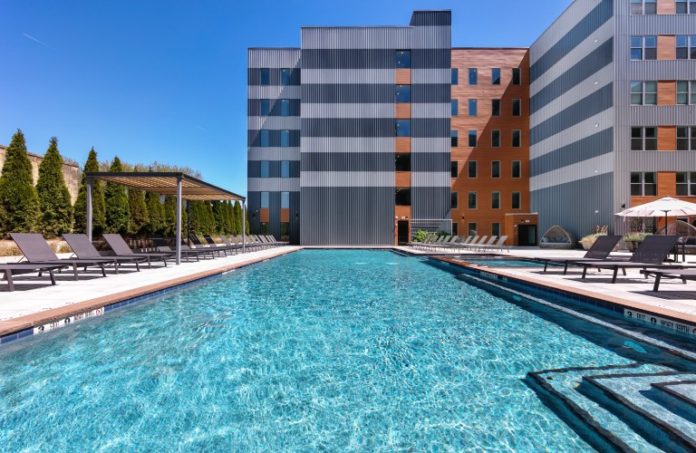 Jersey City’s West Side has experienced a lot of development as of late, and it is attracting significant private investment along with infrastructure improvements that are spurring a wave of new modern developments.

To solidify this fact, 3 Acres, the upscale new rental building located at 400 Claremont Ave., recently completed its leasing program, as the final lease at the 629-home community was executed in July — less than six months after opening to the public, according to an announcement by Developer 400 Claremont LLC, along with the Marketing Directors, the building’s exclusive marketing and leasing agent.

According to the developer, the noteworthy success of 3 Acres can be attributed to a mix of well-appointed studio, one- and two-bedroom residences, abundant amenities and dynamic retail that create an elevated lifestyle experience once exclusive to select Downtown Jersey City and Manhattan high-rise rentals.

“When we conceptualized 3 Acres, we envisioned a community that provided a hospitality-inspired lifestyle experience that rivaled signature properties along the New Jersey waterfront and in New York City, but at a much more attractive price point,” Art Johnson, a principal of 400 Claremont LLC, stated. “Fully leasing the building in such a short amount of time underscores the appeal of the building and the ongoing growth of the West Side as a new residential destination.”

400 Claremont said it worked with its longtime interior design partner Andrew J. Van Etten, along with Marchetto Higgins Stieve Architects, to enhance and deliver its vision for the community.

“We wanted to create a series of niche spaces, from intimate work-from-home cubicles to open lounges, that would take advantage of the vast amount of square footage while avoiding a sense of being in a banquet hall,” Van Etten stated. “We drew from hospitality concepts to provide areas for a mix of activities and atmospheres punctuated by interesting architectural details and finishes.”

Spread throughout 70,000 square feet, the impressive amenity offering and social spaces include an attended lobby with a waterfall, conference room, work pods, a chef’s table with demonstration kitchen, multisport simulator and screening room, resident lounge with a 2,200-gallon saltwater aquarium, and a game room with a mini bowling alley, pingpong, shuffleboard, pinball and arcade games.

There’s also a state-of-the-art fitness center and infrared saunas, while on-site musical entertainment emanates from a Steinway Spirio digital grand piano in one of the lounge spaces that self-plays pieces from a vast library of musical content, as well as simulcasts live performances from great pianists around the world.

“This developer is all about creating a wow factor, but also understands design and the need to provide spaces that are inviting and functional,” Van Etten stated. “It’s a collaborative, creative effort that is fluid throughout the process to deliver the best possible results.”

Show & Tell: How offices use amenities to lure tenants