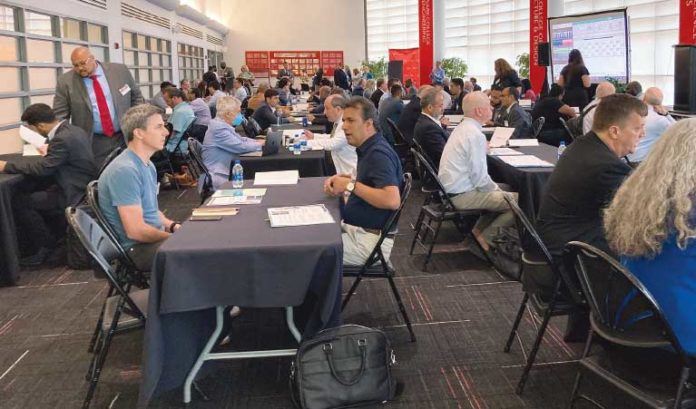 Tech companies weren’t the only startups that came to the New Jersey Economic Development Authority’s Founders & Funders event. We met a couple of food company founders and even the founder of a sunscreen startup. Their interviews are below, in the final part of our series on Founders & Funders.

Kevin Carbone, the creator of Sauce Bae hot sauce from Skinny Flav, based in Howell, told us that his hot sauce tastes great, but also contains turmeric, which helps reduce inflammation.

“Sauce Bae is today’s new ‘go-to’ healthy hot sauce. It’s a pineapple habanero hot sauce that’s made with turmeric, an anti-inflammatory spice. The hot sauce is very low in sodium and truly all natural. So, if you had a checklist and compared it side by side with all the hot sauces on the market, it beats them in every aspect, including flavor,” Carbone said.

He told us the story behind his sauce, which is already sold in more than 1,600 retail stores. Ten years ago, when he was in college, Carbone was diagnosed with ulcerative colitis, and got so sick that, even with medication, he couldn’t go to his classes.

“That was rock bottom for me. The doctors said pretty much that diet didn’t have anything to do with it,” he said.

“I had a decision to make: Am I going to accept this fate that they’re telling me, that ‘it is what it is,’ or am I going to do something about it? I chose to go out and do something about it. And, on this journey, I realized that healthy eating is really just eating clean, real food, with no preservatives. And then I discovered that it was really hard to find healthy foods because all the health products are made more for the gimmick, and not really about looking out for your best interests. So, I discovered turmeric, and that helped me with my inflammation.”

The knowledge of how turmeric can help with inflammation led him to create something that had turmeric in it.

“I created the original recipe at the very end of 2017, spent all of 2018 doing R&D. And then, in 2019, I got a co-packer/manufacturer in North Carolina. Now, Sauce Bae is carried by the two largest national distributors in the country, UNFI and KTV, and it was featured on the multimillion-viewer show ‘Hot Ones.’ We’ve also received numerous celebrity endorsements.”

Talking about his background, Carbone admitted that it was far removed from food creation. He studied finance and later worked in analytics and forecasting. He said that his background helped him to become a startup founder.

“I’m able to approach any problem from an analytical perspective,” he said.

We asked Carbone about his meetings, and he told us that pitching was a new experience for him.

“So far, I got some good feedback. It’s nice to hear the investors give advice as to how I should approach speaking with them,” he said. “And I’m really looking forward to my next meeting, because they are the perfect investor for me.”

Zheng Song, founder and CEO of Angel Planet Foods, based in East Hanover, told us about this vegan and meat-alternative company.

“We fill the blank spot in the market. We provide consumers with a minimally processed, gluten-free and soy-free meat alternative that tastes just like meat, and also has the texture of meat,” Song said.

“We provide consumers with healthy and tasty alternatives, so they can reduce meat consumption without having given up anything. And this is good for their health and also good for the environment. Over time, with skilled production and supply-chain efficiencies, we will be able to bring the plant-based food cost down, as well and deliver value to consumers.”

We asked Song how her meetings with investors went.

“The meetings were very good. The investors did give us some good advice. They want us to focus on the scalability (of the product) to bring costs down and also to quantify each component of the process,” she said. “Some of the investors were interested in us, but said food is not their sector. But they gave us a very enthusiastic endorsement for what we do.”

“Also, we were very, very happy to meet with the NJEDA. We found that there are lots of resources available from the government to us, and startups and entrepreneurs like us. So, from all this, we thought that was a very, very productive meeting.”

Is there such a thing as a better sunscreen? Terry Zickerman believes so. At Founders & Funders, he told us about his natural, easy-to-apply sunscreen that is “safe for the body and the planet.”

“My family and I founded Love Sun Body (in West Orange) in 2012. We were having a discussion in Point Pleasant Beach, saying that we couldn’t find a safe and truly effective natural sunscreen,” he said. “We also were talking about sunscreen application and being able to find something that would be easy to apply and truly safe. So, we decided to make our own, and that’s how Love Sun Body was born.”

We asked Zickerman about his background. He told us that he is a medical doctor, and also worked on Wall Street for 20 years in institutional equity sales. He founded the company in 2012, but was working on the company and at Morgan Stanley concurrently until 2017. Then, he left Morgan Stanley.

“Another year went by and we launched the first of our product line, our body formulas SPF 30, and SPF 50, fragrance free and scented,” he said. “We launched those four formulas in 2018. In 2020, we launched a tinted facial product (along with several other products). And now, this year, we relaunched all nine formulas to be a little bit thinner and lighter application. These are the only sunscreens in America that are certified 100% natural by Ecocert in Europe.”

We caught up with Zickerman after he had been through four meetings, and he said his sessions all went well. One investor told Zickerman that he wouldn’t be the lead investor in a deal, but would invest if someone else took the lead. Zickerman said this would be the first institutional money his company would be raising, as he had been bootstrapping it with friends and family money.

“We are ready to expand the company both domestically and internationally, to expand it to Canada and Europe and increase our distribution and our volume significantly. That’s why we’re here to raise capital,” he said.