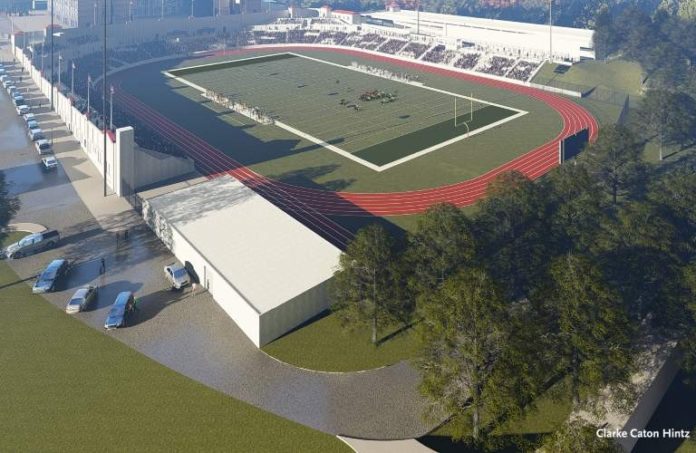 Paterson has officially become the new home for minor league baseball team — the New Jersey Jackals, who will play the 2023 season at historic Hinchcliffe Stadium, they announced Wednesday.

Hinchliffe is one of two remaining ballparks where the segregated Negro Leagues played in the mid-20th century. It lay dormant for the past 20-plus years, but is now undergoing a dramatic restoration.

The stadium improvements are part of a larger $95 million project that includes a parking garage, restaurant with museum and nearby residential complex.

The Jackals, a member team of the Frontier League, a professional baseball league of 16 teams and partner league of Major League Baseball, announced the team is relocating from Yogi Berra Stadium in Montclair to its new, larger home for next season.

In May 2023, the Jackals will kick off a 96-game season at the 7,000-seat stadium that sits on an escarpment above Paterson’s National Historic Great Falls and surrounded by the city’s national historic district — the first planned industrial settlement in the nation in 1792.

Al Dorso, the owner and operator of the New Jersey Jackals, along with the city of Paterson, has plans to improve the Hinchliffe field and venue, align with local businesses and bring additional entertainment to the venue, such as concerts, kids camps, traveling teams, training and exhibitions, holiday events and more.

“We’re thrilled to have the Jackals in Paterson and equally pleased to be working alongside Al Dorso, a visionary, change agent and proven businessman with the leadership, acumen and experience to bring additional growth, prosperity and entertainment to our local community,” Paterson Mayor Andre Sayegh stated. “This development is another watershed moment, pun intended with the Great Falls nearly adjacent to the stadium, for the city of Paterson and one that will surely act as a catalyst for new expansion, entertainment and jobs in the area.”

“I was born and raised in Paterson and, even though I ventured on, I still know this town like the back of my hand and have many fond memories,” Dorso said. “This is a great opportunity at the right time in my life to give back and add to the rich history of this region. More importantly, we have approached this effort with a community-first mindset, starting with working with Mayor Sayegh and other local official and business leaders which we plan to expand to create a true ecosystem of opportunity in the months and years ahead.”