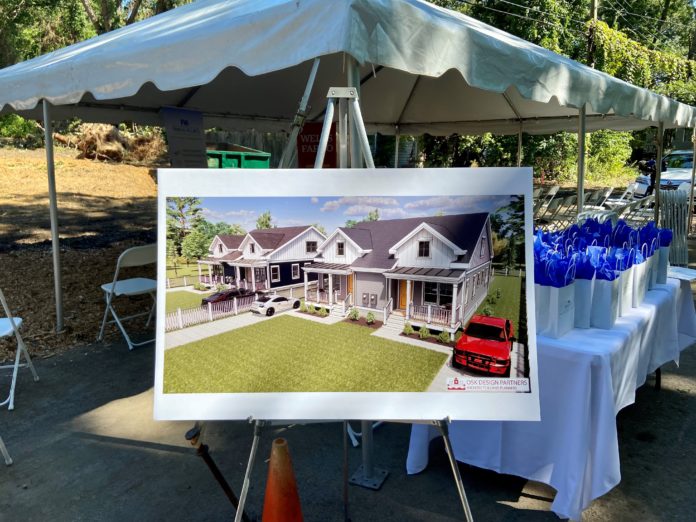 Working closely with municipal officials, FWI received a zoning variance approval to convert 40 and 42 Finlaw Ave. into two duplex buildings, for a total of four rental units — each with two bedrooms at 1,070 square feet. The property — valued at $50,000 — was donated by Wells Fargo as part of its long history of supporting rural communities.

“This is a great day for working families who will be looking for safe, quality and healthy homes,” Rita Wood, chairwoman of the board of trustees of the Financial Wellness Institute, based in Deptford, which is spearheading the construction project stated.

This housing initiative, Wood said, is a key element of FWI’s “REsolution – Healthy Housing Program” — a community-based effort that seeks to connect people with opportunities to purchase or rent safe, healthy, attainable market-rate homes that are built in accordance with Bluefield Homes Healthy Living Standards, which meet Housing and Urban Development and Centers for Disease Control and Prevention guidelines.

According to FWI CEO and President Wanda Hardy, the groundwork for this project was laid with one question in 2017 when she was talking with a colleague.

“We just wondered how there could be a need for housing in South Jersey, which is affordable for working families, when there are so many real estate owned, abandoned, vacant properties littered throughout the region,” she stated. “From there, we began advocating to have these properties turned over to nonprofits so that they could rehabilitate them and help fill the housing gap.”

This effort led to PNC and Wells Fargo collaborating to donate a property in Haddonfield to FWI, which ultimately rehabilitated the property and sold it to a first-time homebuyer.

“Far too many people are burdened by the cost of housing and face housing instability, including here in South Jersey,” Paralee Knight, Wells Fargo vice president of community relations, stated. “At Wells Fargo, we believe everyone deserves an opportunity to have a quality and affordable place to call home.”

Wells Fargo remains a committed supporter of the “REsolution – Healthy Housing Program.” In addition to donating the land where the two attainable market-rate properties will stand, Wells Fargo also provided funding to assist with the project’s predevelopment work through its broader Welcome Home initiative.

The Finlaw Apartments are expected to be ready for occupancy in 2023.