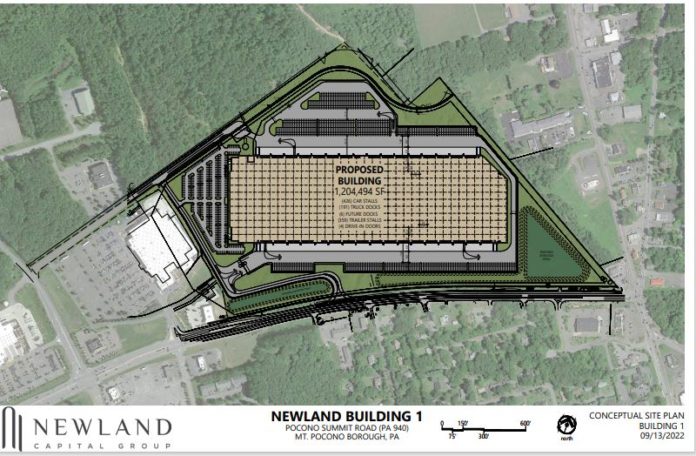 JLL’s Northeast Industrial Region team arranged the acquisition of an 85-acre development site and secured a tenant to lease the 1.2 million-square-foot distribution facility that will sit on it in Mount Pocono, Pennsylvania, according to a Tuesday news release.

Located at at 3379 Pocono Summit Road, off of Interstates 380 and 80 on the eastern edge of the Northeast Pennsylvania Industrial Market, the site will be redeveloped as a 1.2 million-square-foot warehouse and distribution facility preleased to a major industrial tenant. The state-of-the art facility will feature 191 truck docks, four drive-in doors, 359 trailer stalls and parking for 426 vehicles.

Construction of the new distribution center is expected to get underway Oct. 1, with competition scheduled for the first quarter of 2024.

“This is an ideal site offering access to the nation’s most densely populated region, with over 24 million people living in the (New York–New Jersey–Connecticut–Pennsylvania) Combined Statistical Area,” Lockard stated. “Newland Capital Group will bring an exceptional new development to one of the most sought-after industrial submarkets in the country, and we are delighted to be a part of this exciting new venture.”

Northeast Pennsylvania continues to be viewed as a core industrial market for occupiers and investors alike. In the past few years, companies including medical supplies distributor Medline Industries, General Mills, Lowe’s and NFI Logistics have built or leased millions of square feet of space, driving Northeast Pennsylvania’s industrial vacancy to record low levels.

According to JLL’s 2Q 2022 report covering the Eastern & Central Pennsylvania Industrial Market, Class A vacancy fell to a record low of 1.7% during the past year as asking rents climbed over 24% year-over-year to $7.93 per square foot. Despite elevated construction levels, more than one-third of the 42.6 million square feet of new product currently under construction has been preleased.

“We are delighted to bring our expertise in the industrial market to a job-creating project that will contribute to the Poconos economy while providing vital logistics space at the heart of one of the world’s most densely populated markets,” Ty Newland, managing principal, Newland Capital Group, said.

Need a ‘destructive or explosion lab’ in your HQ? C&W is...