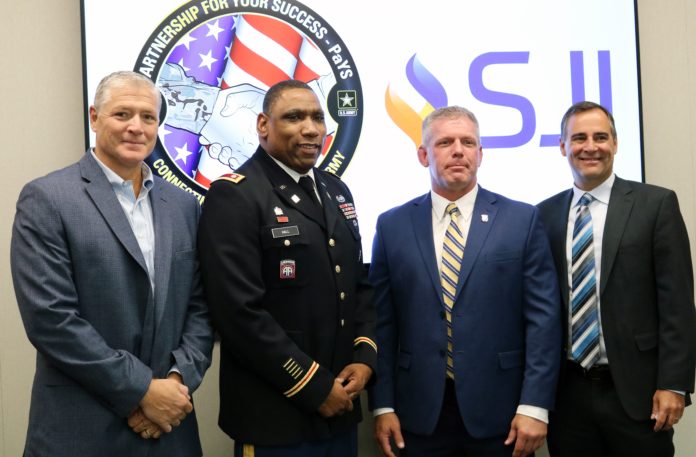 South Jersey Industries recently said it  has partnered with the Army and a cross-section of corporations, companies and public sector agencies to create a talent pipeline for hiring military personnel. Known as the “Partnership for Your Success” program, it is part of the Army’s effort to get together with America’s business community and reconnect America with its Army.

To mark the start of this partnership, SJI hosted representatives from the Army’s Mid-Atlantic Recruiting Battalion on Thurssday for the ceremonial signing of a Memorandum of Understanding.

“Support of the PaYS program will help me reassure soldiers’ parents that the Army reinvests in their sons and daughters, while preparing them for the future,” Hall said.

Soldiers who participate in the PaYS program may select up to five partner employers where they will be guaranteed job interviews. By signing a partnership agreement, SJI welcomes this new opportunity to provide employment to veterans as part of its commitment to diversity, equity & inclusion.

“I’m excited that, as a company, SJI not only recognizes the importance of supporting our troops, but we also understand the benefits of hiring servicemen and -women with the skills necessary to drive innovation,” McLaughlin, who served the U.S. Army from 1989 until 2004 and is a combat veteran of Afghanistan, stated.

In addition to participating in the PaYS program, SJI is actively engaged in supporting programs for veterans in the community and those it employs. In 2020, SJI established the Veterans Engagement Team, an employee resource group that works to increase employee awareness of veterans throughout the company and support the veteran community in the South Jersey Gas and Elizabethtown Gas service territories. VETS also works to develop future company leaders, increase participation by veterans in recruiting and incorporate the life experiences of veterans to improve company business practices.