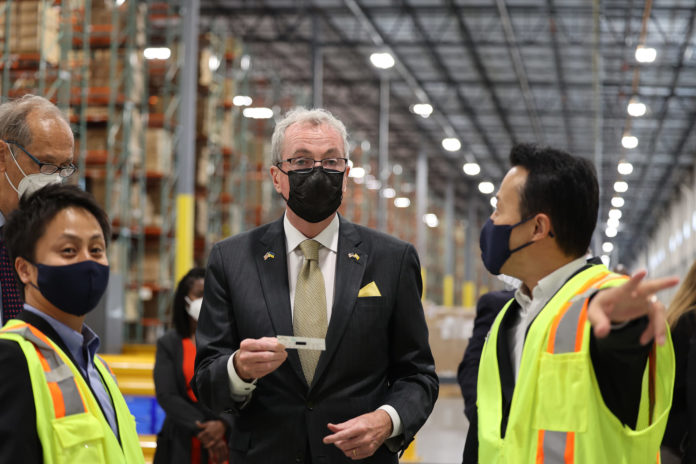 Gov. Phil Murphy has long made it clear that increasing green energy projects in the state is a top priority of his administration.

Murphy also is well aware of this: The initiative relies on the private sector to do its part.

That’s why Murphy was so pleased Tuesday to see global retailer UNIQLO unveil its first solar rooftop in the U.S. — a 3.4-megawatt solar project it created with Luminace at its new Phillipsburg distribution facility.

“My administration’s efforts to reach 100% clean energy by the year 2050 would not be possible without the cooperation of the businesses in our state,” Murphy said at the opening.

“I thank UNIQLO and Luminace for their collaboration in installing these solar panels on the roof of their nearly 1 million-square-foot facility in our very own Phillipsburg, New Jersey. These actions will bring us one step closer to a greener economy and creating a stronger, safer and healthier environment for all New Jerseyans.”

UNIQLO said the project is a significant step in a climate strategy of its parent company, Fast Retailing.

“UNIQLO aims to improve the daily lives of people everywhere through our apparel called LifeWear,” he said. “We are proud of this important milestone that extends our mission beyond clothing, helping to make our operations better for the planet.

“We are honored to have partnered with Luminace, a pioneer in the renewable energy sector, on this state-of-the-art project, which will increase the world’s renewable energy footprint starting from New Jersey.”

Luminace CEO Valerie Hannah said her company is happy to do its part.

“Luminace is pleased to support UNIQLO’S commitment to renewable energy and their goal of carbon neutrality,” she said. “This project demonstrates Luminace’s exceptional turnkey decarbonization solutions, providing accessible, reliable and renewable energy, with no upfront costs to our customers.”

Murphy thrilled PennEast project proposal is being dropped: ‘It would have...