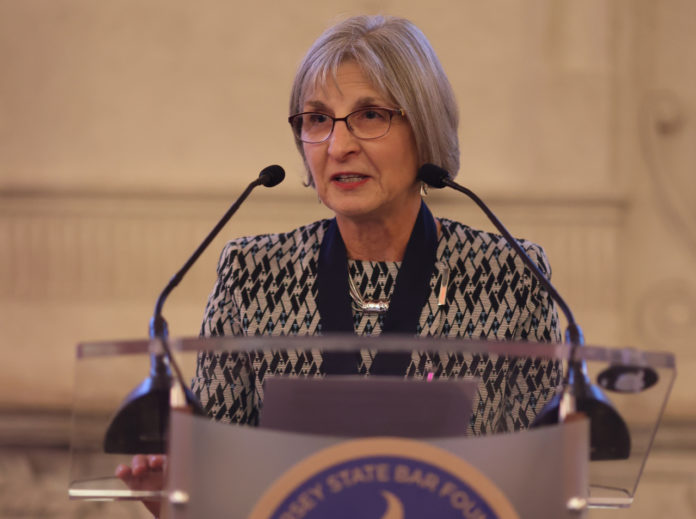 The award is the most prestigious honor given by the NJSBF.

LaVecchia, a retired New Jersey Supreme Court justice, is one of the most consequential justices in modern history, sitting longer than any woman on the state Supreme Court. She leaves a lasting legacy on New Jersey jurisprudence through more than 240 opinions she authored during her time on the court.

NJSBF President Kathleen Fennelly said LaVecchia is a role model for all.

“The foundation’s Medal of Honor recognizes professional excellence, leadership, commitment and service to the public and legal community. Justice LaVecchia exemplifies all these qualities,” she said. “We congratulate Justice LaVecchia and applaud her outstanding contributions to the legal profession and to the advancement and improvement of the justice system in New Jersey.”

LaVecchia said she was honored and humbled.

“I have spent the majority of my legal career in various forms of public service, including 21 years on the state’s highest court,” she said. “To have my service as a lawyer recognized by the foundation — an organization dedicated to promoting pride in the law, our legal system and public service — is a tremendous honor.

“It is humbling to receive this wonderful tribute for work that I was privileged to do and for which the service itself was an honor. I thank the foundation for recognizing and including me in the company of the great lawyers of our bar who have received this award.”

In her private practice, LaVecchia draws upon her many years of judicial experience and understanding of New Jersey’s state agencies and regulatory landscape to help clients resolve complicated legal matters, and her extensive knowledge and experience with the appellate process informs trial strategy for the most complex cases.

Before her nomination to the Supreme Court, LaVecchia served as the New Jersey commissioner of banking & insurance, overseeing thousands of insurance companies, banks and credit unions. Prior to that, she held various leadership positions, including deputy chief counsel in the Office of Counsel to Gov. Tom Kean, chief administrative law judge in New Jersey’s Office of Administrative Law and director of the Division of Law within the Department of Law and Public Safety.