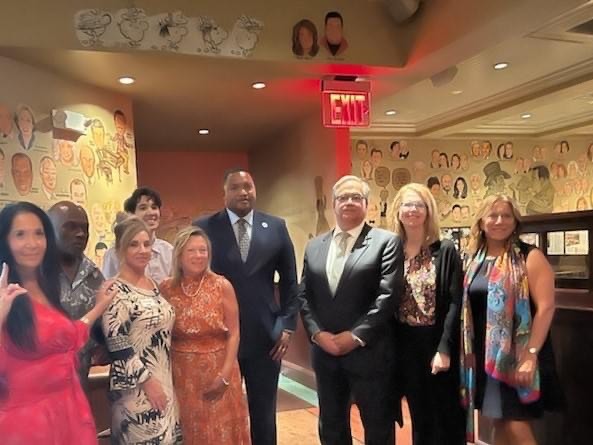 “The future of Atlantic City would seem brighter if a microchip research and manufacturing facility or a gene therapy facility was under construction here somewhere,” Atlantic City Development Corp. President Chris Paladino said Tuesday as he addressed members and guests of the Public Relations Council of Greater Atlantic City.

Paladino was the featured speaker at the council’s luncheon held to kick off its 44th year. Held at the Palm Restaurant inside the Quarter at Tropicana, Paladino, who is president of ACDevco and New Brunswick Development Corp., has initiated, developed and managed 8.3 million square feet of residential, commercial, academic, and institutional development projects valued at $3.5 billion.

During his presentation, Paladino discussed his past and future development projects in Atlantic City and New Brunswick, tourism in the region, economic success for New Jersey and the action Atlantic City needs to take to create meaningful change for residents, employees, businesses and tourists.

He stressed the need for the Atlantic City area to attract new innovative industries to not only benefit the local community and economy, but provide career paths for future generations.

“I think we really do need to start to look at where the jobs of the next generation are, so that we can keep our children employable. … We need to be ahead of the curve,” he said.

Following his presentation, the Palm surprised Paladino and the audience with an unveiling of his caricature on the Palm Wall of Fame. Paladino now joins other well-known community members and celebrities on the restaurant’s legendary wall, which honors a distinct group of Atlantic City’s who’s who.

Prior projects completed under Paladino’s stewardship have included the Gateway Development Initiative in Atlantic City, which included the development of the new Atlantic City campus for Stockton University and the new headquarters for South Jersey Industries, the College Avenue Redevelopment Initiative on the Rutgers University-New Brunswick campus and the renovation of the former Rutgers Law School in Newark as university housing, together with many other key redevelopment projects in New Brunswick and throughout New Jersey.

C&W arranges $19.5M in refinancing for office property in Princeton