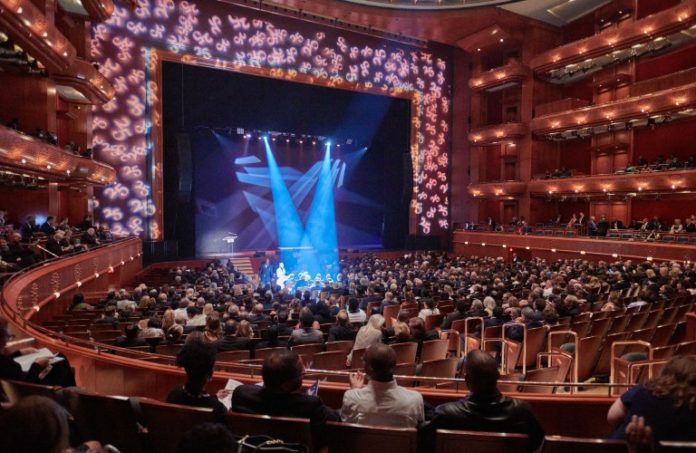 It’s logical to describe the New Jersey Performing Arts Center’s annual Spotlight Gala with a look at its acts — a mixture of past, present and future performers (all with strong New Jersey ties) who illustrate the importance of the state’s premier cultural institution. Any time you close a show with George Clinton, the Godfather of Funk, well … you had to be there.

It’s important to describe NJPAC’s annual Spotlight Gala in terms of money raised by the Women of NJPAC, which has led these efforts since the time the building was just a concept. This year, it’s $2.2 million (and counting), but it’s more than $53 million overall — which serves as an explanation and exclamation for why the building looks as good now as it did when it opened in 1997. Faith Taylor and Mindy Cohen deserve credit for leading that charge.

But it’s imperative to describe NJPAC’s annual Spotlight Gala for the tribute it was to Ray Chambers, for, without Chambers, there is no NJPAC. And without NJPAC, there is no Prudential Center — and there is no revival of the business community in Newark.

The event, always the best of the fall gala season, drew approximately 800 Saturday night. And, while it was billed as a way to celebrate “25 spectacular years” of the performing arts center, it also served as a tribute to Chambers and his family — a philanthropic group that not only has helped Newark and New Jersey, but played an important role in so many of the philanthropic efforts in the country and around the globe in the past three decades.

How influential has Chambers been? Consider just one part of his resume: His efforts with the United Nations to reduce the impact of malaria around the world likely have saved tens of millions of lives.

On Saturday night, he was given the highest of complements from former Gov. Tom Kean and, in a video tribute, from former Presidents George Bush and Bill Clinton, as well as Bill Gates. Of course, as significant as Chambers has been on the world stage, his impact is greatest in Newark, where he has made it his mission to serve — one person at a time.

The evening’s most poignant moments were first-person appreciation speeches from Shavar Jeffries, Shané Harris and Vaughn Crowe, three Newark natives who — with the guidance of Chambers’ many programs along with his personal mentoring — have become next-generation leaders, each of whom is paying it forward.

CEO John Schreiber was one of many speakers who tried to sum up Chambers’ impact.

“This year’s gala honors Ray Chambers and the Chambers family, who have been essential to this institution since before Day One,” he told the audience. “None of us would be here without Ray and his family’s support.

“For decades, Ray has made it his life’s work to serve others. Whether you’re a leading expert in the fight against malaria, or a kid from Newark who needed some advice, Ray’s mantra remains a simple four-word phrase: ‘How can I help?’”

Kean found out just how much help Chambers could provide back when the NJPAC was just a vision — one the state did not want to fund by itself (it figured it would get stuck with the bills, so it wanted a substantial contribution from the private sector) and one the private sector said it would only fund if it were in places such as Princeton or Morristown (because no one wanted to come to Newark a generation ago).

The idea of NJPAC, Kean said, was dead in the water.

Discouraged, he spoke with Chambers. And in that conversation, everything changed.

Kean said Chambers offered to put up $20 million himself — and said he was confident he could get others to match, if not double, the amount. With that committed, the state put up the other half of the funds. About a year later, NJPAC was breaking ground.

“I don’t think we could have done it without Ray — without that commitment, without that vision,” he said. “One thing I’ve learned throughout my life is that the people you treasure are the people with vision. The people who see life not for what it is, but what it could be. They see the future out there and try to make the future better.”

That future was on display throughout the entertainment portion of the night.

In addition to Clinton, Dionne Warwick gave a legacy performance. Savion Glover, Regina Belle and Laura Benanti showed why they are at the top of their games, too.

But it was the future that won the night.

The youthful Matthew Whitaker and Wé McDonald — both barely 21 — brought the house down when they covered Chaka Khan’s “Ain’t Nobody.” An even bigger treat was seeing those who train at NJPAC and in other parts of the country show their stuff.

Schreiber said that is the essence of NJPAC: Nurturing a love of the arts — and helping those who excel in them.

“Twenty-five years, 11 million visitors, 2 million students into this unlikely enterprise,” he said, “we are really excited about what’s next. As the state’s anchor cultural institution, all that we do here is in service to the community. We’re here to help make our city and state a better, healthier, culturally richer place, however we can.

“That’s what brought us all together tonight in one room: Neighbors, donors, parents, students, musicians, tap dancers — we all believe in the power of the arts to catalyze and change lives.”

The night wasn’t all about looking back. Schreiber described new initiatives aimed to take NJPAC to the next level, he said.

“Research proves that there’s a connection between oneself and engagement in the arts — and, thanks to our friends at RWJBarnabas Health and Horizon Blue Cross Blue Shield, we’re now launching a new initiative focused on arts that will promote community health,” he said.

“In addition to producing over 250 free cultural events throughout greater Newark every season, we’re planning new neighborhood partnerships to consistently bring performances and workshops to every ward in Newark.”

NJPAC will work toward the future of the youth in the town with the Colton Institute for Research and Training, thanks to the generosity of Stewart and Judy Colton, Schreiber said.

“It’s an endowed initiative that’s the first of its kind,” he said. “It combines research, professional development, mentorship and best practices in education programming, all under the umbrella of this unique performing arts center.”

And that arts center will be the anchor of coming arts and entertainment district, too.

It’s hard to imagine that Chambers — along with Kean, then-Newark Mayor Sharpe James and inaugural NJPAC CEO Larry Goldman — could have envisioned all this 25 years ago.

But, to hear Chambers tell it, seeing the future is about seeing a movement. He called NJPAC the greatest public-private partnership he has ever seen — one where all sides came together for the good of the community.

Upon receiving the Founders Award, taking the stage with more than a dozen members of his family, Chambers said he was looking for a way to express the magnitude of NJPAC.

He told a story of when he met with Nelson Mandela and Archbishop Desmond Tutu in South Africa, hearing them use a South African tribal word, “Ubuntu.”

Chambers, unfamiliar with it, asked Tutu to explain.

“He looked at me with those big eyes and said it means, ‘I am because you are,’” he said. “That gave me goosebumps.”

Chambers said it sums up the collegiality of everybody who’s been involved in NJPAC over the years.

“This building has become more than a building,” he said. “It’s become the community.

Why Hispanic businesses on Main Street are being left behind —...

New owner says Denville bakery staple Mara’s will be back in...