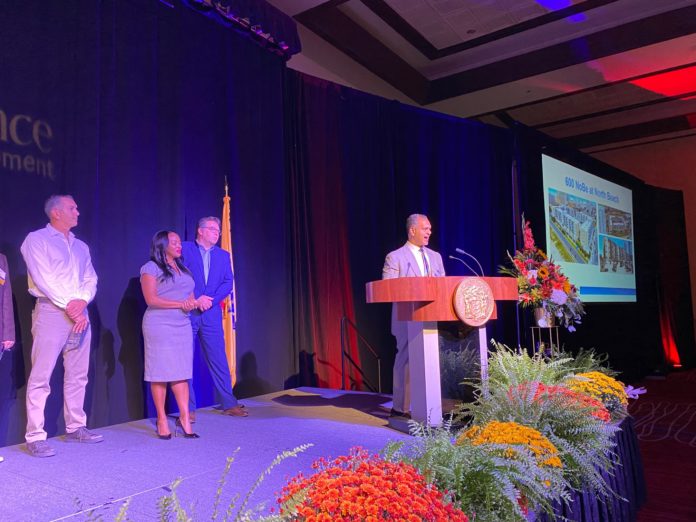 Right after being given an award for 600 NoBe at North Beach — the first major mixed-income multifamily project to open in Atlantic City in more than 50 years — Boraie Development Vice President Wasseem Boraie let it be known that the city would not have to wait that long for the next.

Boraie, speaking Friday in Atlantic City at the awards ceremony that capped the two-day Governor’s Conference on Housing & Economic Development, told the crowd that Boraie is planning to start on 700 NoBe early next year.

Boraie held back on details, saying only that it would be a midrise building that likely will have hundreds of additional units. But, if it’s anything like 600 NoBe, it figures to breathe additional life into that part of the town — and be far different from traditional development in the area.

The project was honored in the Leading Neighborhood Revitalization Partnership category.

“In every new city we go into, we take the first risk, and then our public partners follow,” Boraie said. “And, I have to tell you, the New Jersey HMFA in particular stood up in a huge way to support Atlantic City. They were a catalyst.”

The 600 NoBe at North Beach project, which features three four-story buildings (which combine for 200 market-rate units and 50 affordable units) that surround a large pool and other resort-like features, was one of five winners on the day.

A look at the five:

Retail Diversity Business Incubator (Camden): 1327 Haddon is a 2,020-square-foot project that turned a blighted retail store into a retail incubator. The project will serve as the catalyst for business growth and quality of life in Camden. Not only did this project provide employment, the retail operations also housed in the incubator will provide countless additional jobs.

Partners in the project include the Department of Community Affairs, the Robert Wood Johnson Foundation, Mario Construction II, Donovan Architects Parkside Business and Community in Partnership and the Latin American Economic Development Association.

Lua Homes at 3rd Avenue (Newark): The newly constructed two-unit housing project in the city of Newark was created by Lua Homes and M&M Development. The homes consist of two three-bedroom apartments for unhoused domestic violence survivors earning less than 30% of the HUD average median income.

Partners in this project include the city of Newark, New Jersey Community Capital, RWJ Behavioral Health and the Department of Community Affairs.

Partners include the Casino Reinvestment Development Corp., the Economic Development Authority and the Housing and Mortgage Finance Agency.