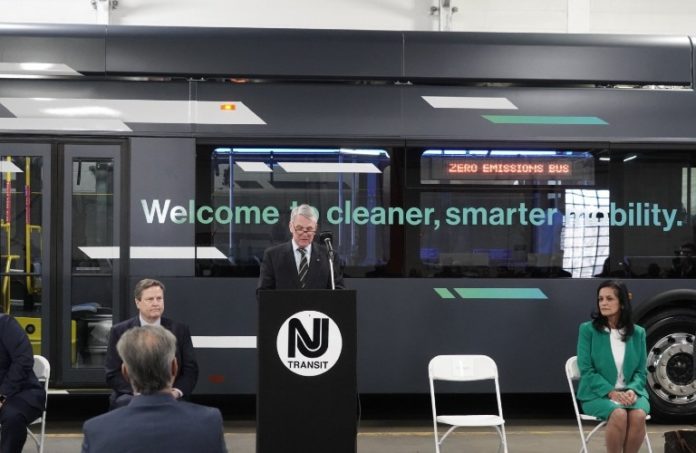 New Jersey Transit has made strides in its goal of transitioning to a 100% zero-emissions bus fleet by 2040. NJ Transit CEO & President Kevin Corbett will be joined Tuesday by U.S. Rep. Donald Norcross, along with local, county and state officials and other stakeholders to introduce the agency’s first battery electric bus, which will soon be entering revenue service.

Newton Avenue Bus Garage in Camden will play host to the officials as it readies to plug into the future of electric buses.

In March of this year, the first electric bus charging system was installed, waiting for deployment. In all, eight electric vehicle chargers at the garage have been installed, bringing New Jersey one step closer to achieving Gov. Phil Murphy’s Energy Master Plan.

In January 2020, Murphy signed legislation establishing goals to increase the use of zero emissions vehicles in New Jersey, which included:

Scalfo Electric Inc. of Vineland was awarded the contract of $3.235 million to renovate the Newton Avenue Bus Garage with electric vehicle charging stations and other associated infrastructure modifications.

“The future of transportation is clean energy, and it’s no surprise that Camden is ahead of the curve in adopting these technologies,” Norcross (D-1st Dist.) said in March. “These buses not only get us closer to a zero-emissions future, but they also make our communities healthier today by immediately reducing emissions in our neighborhoods and cities. The Infrastructure Investments and Jobs Act will build upon state efforts by plugging New Jersey into a nationwide EV charging network, making clean energy transportation more available to personal vehicles as well.”

The Camden project is a first-of-its-kind initiative for NJ Transit, which will also review the infrastructure resources and work required to modernize its bus garages to accept new charging stations, and the significantly greater power feeds needed to energize them.