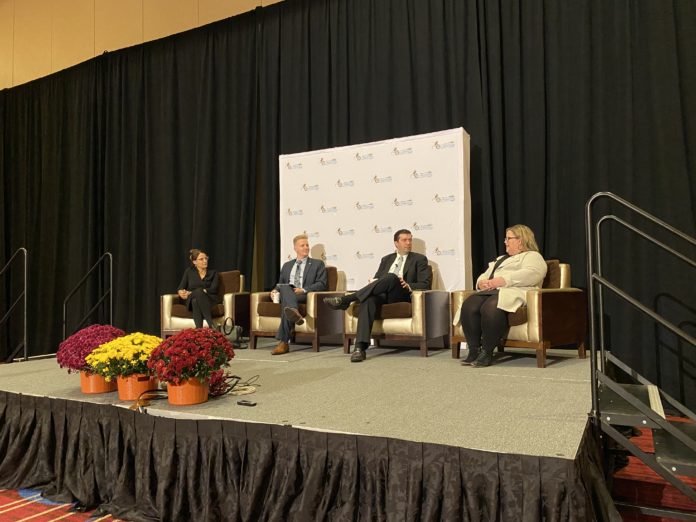 Tim Sullivan, the CEO of the New Jersey Economic Development Authority — one of the key agencies involved in helping to build the offshore wind industry in the state — has a pretty good analogy for the excitement around the sector.

“This is literally like when they discovered there’s oil and gas under the Gulf of Mexico,” he said.

“There’s a brand-new industry coming to life on the East Coast, from the Carolinas up through Maine. The wind is strong enough and the continental shelf is supportive of the technology. We need to be able to harness this economically, because there are billions of dollars of private-sector investment that New Jersey is perfectly positioned geographically to capitalize on.”

The EDA, through numerous incentive programs, is doing its part to gain a large share of this new industry. The key word there being “share.”

Sullivan, speaking from the New Jersey Clean Energy Conference in Atlantic City, said he’ll be the first to say he wants New Jersey to be the biggest player in the game. But he’ll also tell you that the state will benefit more if it’s not the only player.

“It’s good for an industry when there is scale built and it’s a regional industry,” he said. “This can’t just be a New Jersey play versus a New York play versus a Virginia play.”

The industry boom already has been a huge economic boom for the state.

The New Jersey Wind Port, which broke ground last September in Salem County, will provide a location for essential staging, assembly and manufacturing activities related to offshore wind projects up and down the East Coast. At full build-out, it will create up to 1,500 manufacturing, assembly and operations jobs and drive billions of dollars in economic growth back into the New Jersey economy.

The Wind Port, which should be operational in 2024, will have a total footprint of more than 220 acres, enabling it to support marshalling of two wind projects concurrently as well as up to three co-located manufacturing facilities.

Atlantic Power Transmission and Morrison Energy are hoping to partner on a project to develop a manufacturing facility in New Jersey that potentially could produce the massive, 200-feet-tall, 5,000-ton jacket foundations that are used to support offshore wind substations.

That proposal, which will create thousands of jobs and push additional millions into the economy, is tied to the biggest economic development project out there.

Later this month, the New Jersey Board of Public Utilities will decide which company (or companies) will get the right to build the multibillion-dollar transmission service — the underground vehicle by which the energy created by the offshore winds is brought to the Shore.

All of these projects give New Jersey a big lead in this gold rush. Perhaps one that is insurmountable. After all, they are so massive that it wouldn’t make sense to build duplicate facilities elsewhere.

And elsewhere, Sullivan said, does not have New Jersey’s geographic advantage.

“I think we’re better positioned than everyone else,” he said. “I think you’d rather be in the center part of the map, rather than the upper part or the lower part of the map. So, geography is on our side.”

While the California Gold Rush came and went in less than a decade, the benefits of the offshore wind energy sector have no end in sight.

“The long-term play here is the next generation of technology,” Sullivan said. “The 20-megawatt turbine, the 25-megawatt turbine that doesn’t exist yet — we want that to be developed here. We have to focus on our innovative R&D capacities.”

That research & development potentially will not only help New Jersey — but the entire East Coast. That’s the ultimate goal, Sullivan said. And that’s why New Jersey is hoping the other states build out the industry, too.

“It’s important that this industry gets built on scale,” he said. “That’s how it’s really going to evolve and create the economic benefits we hope for.”