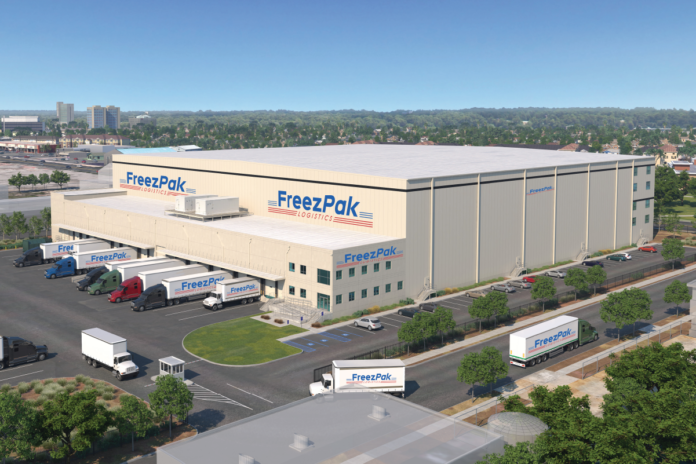 Gov. Phil Murphy openly acknowledged Monday that the state’s ambitious clean energy challenges are going to need buy-in and support for private companies — offering that “doing good” also would be good for their bottom lines.

He apparently is not alone in that assumption.

On Tuesday, FreezPak Logistics, a leading third-party food logistics company, announced it had completed its 2.4-megawatt rooftop solar project at its storage facilities in Carteret and Elizabeth.

The project, which was installed by Greenskies Clean Focus, a national leader in commercial renewable energy development, and Vanguard Energy Partners, a national solar construction firm, will provide clean, renewable solar electricity at both locations: Carteret (985 kilowatts) and Elizabeth (1,414 kW).

The announcement marks the second major warehouse facility to install a project in the past two weeks. Uniqlo now has a 3.4 MW solar project at its Phillipsburg distribution facility.

Those looking to do the same should know this: The projects came at no upfront cost to FreezPak.

Greenskies, which funded the projects, will purchase the power generated by the arrays at a low, fixed rate for the next 15 years. Greenskies also will provide ongoing management and maintenance.

“It’s rewarding to work with local partners like Vanguard to deploy onsite solar and accelerate the transition to renewable energy sources for environmentally conscious businesses like FreezPak.”

The FreezPak Logistics projects will have great impact.

According to the American Council for an Energy-Efficient Economy, refrigerated warehouses have one of the highest electric energy consumption rates in the commercial building sector. Their electric usage often ranges from 40 to 60 kilowatt-hours per square foot per year, with refrigeration accounting for more than 70% of overall electric use.

The solar installations at FreezPak Carteret and Elizabeth are projected to generate a combined 2,832,900 kWh in their first year of clean electricity generation. Over the next 25 years, that energy will offset around 50,200 metric tons of carbon dioxide (CO2), the equivalent of taking more than 10,825 gas-powered cars off the road or preserving 59,400 acres of forest.

Mike Saoud, co-CEO of FreezPak, said the company is happy to help the state reach its clean-energy goals.

“Our company is very focused on controlling cost, not only for the bottom line, but also to continue our support to be closer and closer off the grid,” he said.

“The use of hydrogen fuel cells, solar panels, upgraded dock equipment and, most recently, the use of ammonia refrigeration systems. These are all components of becoming a more sustainable organization. The use of our hydrogen plants will also pay off in the very near future with hydrogen tractors coming into the market.”

Co-CEO Dave Saoud said the projects fits the vision and mission of the company.

“FreezPak has been steadfast in our efforts to become more ESG (environmental, social & governance). Woodbridge is being built to LEED certification standards,” he said. “We will continue to be open to ways we can be more environmentally responsible.”

FreezPak Logistics is a family-owned company headquartered in Carteret. The company currently operates five facilities, including four in New Jersey and one in Philadelphia. FreezPak also has facilities under construction in Miami and Woodbridge.

The FreezPak location in Woodbridge, projected to open in the fourth quarter, will also host a new rooftop solar energy system in partnership with Greenskies and Vanguard.

Murphy, speaking in general terms at the state’s Energy Conference on Monday, said he’s glad to see companies participating in projects such as these.

“Thankfully, there are many folks around the state whose actions are going to help us get to that 100% goal,” he said.

JLL secures $20.5M in refinancing for Garabrant in Jersey City

JLL helps arrange $31.M in financing for acquisition and renovation of...