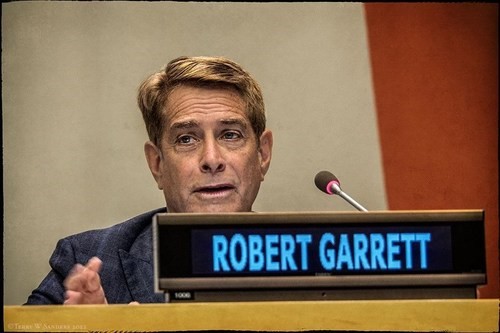 Hackensack Meridian Health CEO Bob Garrett was grateful for the opportunity to tell the United Nations how his health system is working to combat human trafficking — and pleased to be able to use the moment to detail additional efforts that HMH is putting into place.

The global issue is that important to him.

“Health care providers have a moral imperative to intervene in this global tragedy, and we can save countless lives with this effective policy that can be shared throughout the world,” he said. “Fighting human trafficking aligns with a major priority of our organization — promoting health equity and human dignity to improve the health of our communities.”

Garrett, who spoke at the U.N. last week, said the numbers around human trafficking are almost too much to believe:

“It’s just staggering to think about how, in the year 2022, this many people are in this form of slavery across the globe,” he told ROI-NJ. “Because that’s what this really is, slavery.

“If we can do something that leads to even one person being freed from their captor, then it’s worth it.”

Like the rest of the state, HMH began its involvement on the issue in 2017, when New Jersey first mandated that there should be screening in the emergency departments for human trafficking.

In the past three years, HMH was one of a handful of leading U.S. health systems and international health care organizations to work with Global Strategic Operatives and various levels of law enforcement, including Homeland Security, to do more training.

“We put in place a pretty comprehensive protocol and policy,” Garrett said. “Now, what they want to do through this U.N. conference, is to get the World Health Organization to adopt those types of policies and protocols globally.”

Garrett announced all patients entering the HMH system — approximately 500,000 per year — will be given an initial screening, just as they now are for social determinants of health.

“We’re going to expand our screening capabilities,” he said. “And we’re now going to require human trafficking to become part of the medical school curriculum. I think we’re the first medical school in the country to do that.”

It makes sense. The numbers say it does. Studies show that 9 in 10 victims seek medical aid, with 70% of them accessing care through an emergency department.

“The only time that a victim might be separated from their captor might be while they’re going through a health care procedure,” Garrett said. “Whether it’s the emergency department, labor and delivery, or when they’re seeing their primary care physician, it may be the only time they really get separated.

“It’s important that we, as providers, see the signs and ask the right questions. Then, maybe that person will come forward, and they’ll be able to alert law enforcement.”

Garrett said it is imperative for more health care organizations to get involved. The issue is too important, he said.

“This aligns with the mission of health care,” he said. “I am calling on all health care leaders to do their part to help victims and save lives.

“Together, we can make a difference.”