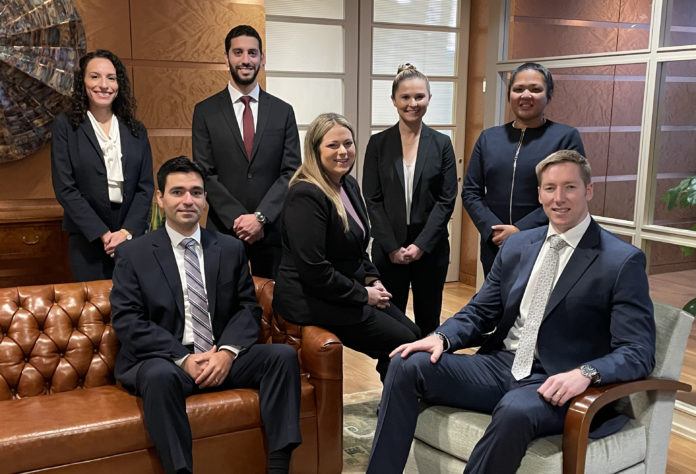 Riker Danzig announced it has hired seven fall associates, saying they add extraordinary talent and diversity to the Morristown-based firm.

Six of the seven members of the new class served judicial clerkships in the New Jersey Supreme Court or the Law, Chancery or Appellate divisions.

“With more than 50% women among the new associates, 40% identifying as diverse and another who served in the military, we are especially proud that our new class represents the rich diversity of our community,” he said.

Here’s a look at the associates:

Sean Camperson: Will serve in the Securities Litigation, Arbitration, Regulation and Investigations Group.

Camperson received his J.D. from Fordham University School of Law in 2022, where he served as president of the Fordham Law Veterans Association in 2021 and was a member of the International Law Journal. He received his undergraduate degree from Lehigh University in 2011.

Camperson served in the Army from 2012-19, including as platoon leader and senior operations ofﬁcer on U.S. bases and in Afghanistan, receiving the Bronze Star and rising to the rank of captain.

Karimah Munem: She is a returning associate in the firm’s White Collar Criminal Defense and Investigations Group and the Governmental Affairs Group.

Kori Pruett: Will serve as an associate in the firm’s Commercial Litigation Group. Pruett received her J.D. in 2021 from Georgetown University Law Center.

She received a Master of Science in 2012, and her B.A. in 2010 from Florida State University. Following law school, Pruett served as a law clerk to the Hon. Robert Lougy, Superior Court of New Jersey, Mercer Vicinage. While in law school, she clerked in Washington, D.C., at the Department of Justice in the National Security Division, Foreign Agents Registration Act Unit and the Office of Tribal Justice. She also clerked at the U.S. Senate Permanent Subcommittee on Investigations.

Cheska Tolentino: Will serve as an associate in the firm’s Insurance and Reinsurance Group.

Gregory Toma: Will serve as an associate in the firm’s Bankruptcy & Corporate Restructuring and Intellectual Property groups.

Jose Ward: Will serve as an associate in the firm’s Insurance and Reinsurance Group, handling complex coverage and defense matters.

Following law school, Ward served as a law clerk to the Hon. Garry S. Rothstadt of the New Jersey Superior Court, Appellate Division. Before pursuing a career in law, Ward developed the surety bond department of a national insurance agency for nearly a decade.