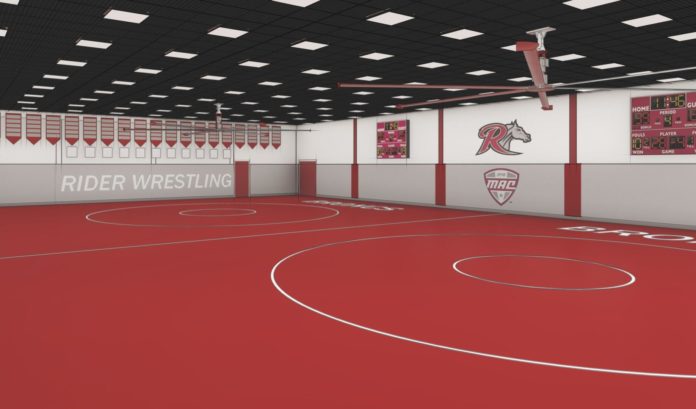 Rider University has received a $500,000 leadership gift from former All-American wrestler Tim Morrison and his family that will be used to more than double the size of the current wrestling training facility.

The gift, the largest in the program’s history, was made in honor of former Rider wrestling head coach Gary Taylor, who died Sept. 14.

To underscore the honor, the Morrison family has asked that the facility be named the Gary Taylor Wrestling Center.

“Gary Taylor recruited me to wrestle in 1979, and later my three sons,” Morrison said. “He instilled us with inspiration and motivation. He was a true mentor to me and my family. During the time we spent with Gary, we got to see his devotion to Rider wrestling and, most importantly, his devotion to the individuals that he coached. It is our honor to make our gift in tribute to Gary and all he has done for my family and for Rider.”

The renovation of the wrestling facility will build on Taylor’s 39-year legacy at Rider. Taylor led his teams to 442 dual victories, 14 conference championships and mentored 15 different wrestlers to 17 All-America honors.

The wrestling center’s expansion will provide student-athletes with a larger practice area, a strength and cardio section and an enhanced team locker room.

Morrison said he wants his family’s leadership gift to inspire others to give so that the wrestling center plans can include items like new wrestling mats, an honorary “Wall of Champions” and an increase in the size of the planned team room. The university seeks to raise an additional $250,000 to increase the scope of the project. (Click here for more information on giving.)

“Hopefully, our gift will inspire others to step up the support and give in honor of Coach Taylor’s legacy,” Morrison said.

“We challenge other alumni and friends of Rider wrestling to engage in providing our wrestling team the facilities that other NCAA Division I wrestling programs already enjoy,” Morrison said.

Rider wrestling has been ranked nationally on a perennial basis. The Broncs have produced 18 All-Americans, including Morrison, who earned the honor in 1983. Most recently, Jesse Dellavecchia became Rider’s first-ever national finalist in 2021.

“The impact of this gift from the Morrisons is significant,” he said. “This transformational project will fortify Coach Taylor’s legacy at Rider and provide a top-tier Division I training center for all current and future Rider wrestlers. This commitment to excellence will also elevate our profile in the eyes of our alumni, fans and prospective student-athletes.”

“Thanks to the incredible support of the Morrisons, the team will now enjoy the benefits of a much larger, and much improved, training facility,” he said. It will greatly enhance the experience of our student-athletes and speak volumes to recruits of the program.”

This represents the second $500,000 gift to Rider athletics reported this week.