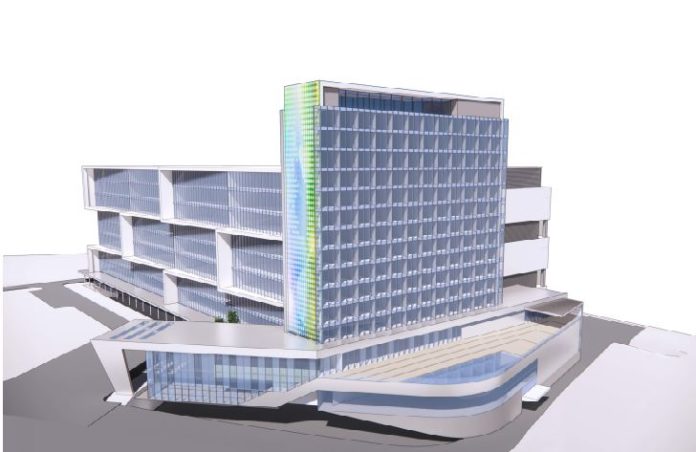 As part of the borough’s $1 billion waterfront redevelopment, the 15-story project has been in the works for about a year. The industrial site, which is located on a portion of the former DuPont site in the Chrome Waterfront Redevelopment Zone north of Veterans Pier and Carteret Waterfront Park, has already undergone a 10-year cleanup and could start construction as soon as all approvals, financing and studios are in place.

“This is a great opportunity to continue to grow our industrial and commercial base, to really highlight the $2 billion in development that has happened in Carteret, and it ties in nicely with the performing arts center on Washington Avenue,” Mayor Daniel J. Reiman said.

The project has the potential to create thousands of local jobs and pump $1 billion in union construction into the waterfront area, according to Reiman.

Developer Joseph Bezzone said this project will be unique because of its multiuse component.

Multiple outlets for retail and hospitality will range from corporate dining to full-service food and beverage options.

Having developed properties from Boston to Atlantic City, Bezzone said he chose Carteret as a location mainly because of the transportation infrastructure of the New Jersey Turnpike, Newark Liberty International Airport and Carteret’s forthcoming ferry.

“Carteret’s investment in its waterfront under the bold leadership of Mayor Dan Reiman has created an engine of opportunity that we hope to share in,” the developer said.

For this project, Bezzone said it partnered with Mark Meisner and the Birch Group, which will take the ownership lead and provide the necessary resources required for a development of this magnitude and importance.

For Reiman, he believes the project is a game-changer for Carteret.

“There are five of these projects around the state. Realistically, there’s only going to be two or three completed. Fort Monmouth has the potential to be just astronomical, but, at the same token, they have no direct access. You can’t get the tractor-trailers and the infrastructure you need off the Parkway because you can’t take tractor-trailers on the Parkway,” Reiman said.

Carteret is right off the New Jersey Turnpike. There will also be access through an already-approved future ferry terminal. There’s also land mass and infrastructure for water, sewer and utilities. Reiman said the site is capped and the borough has control over the property.

“It’s in the Urban Enterprise Zone, a Smart Growth Zone and a Redevelopment Area. There are so many factors that make it the prime location for this to happen,” Reiman added.

Carteret’s planning board voted unanimously to take the project to the next step, which is to have the redevelopment agreement approved by mayor and council. Then, there will be a filing in front of the Middlesex County Planning Board, which is generally just a cursory review. After that, it’s up to the Governor’s Office and the state Department of Business & Economic Development (which has already expressed its support).

“It’s an early preliminary approval. They still have a lot of work to do, but now they can take this, go to Hollywood and Wall Street, and say, ‘Hey, the city’s on board, the county’s on board, the state’s on board, let’s sign you up,’” Reiman said.